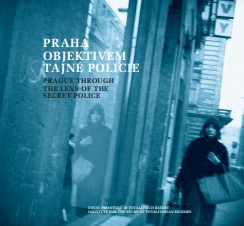 Author(s): Jan H. Vitvar , Pavel Žáček, Anna Pavlíková, Miroslav Urbánek, Vladimír Bosák
Contributor(s): Vladimír Bosák (Editor), Patrik Virkner (Editor), Štěpán Černoušek (Editor), Jana Kudělková (Editor), Alexis Gibson (Translator)
Subject(s): Politics / Political Sciences, Politics, History, Fine Arts / Performing Arts, Photography, Political history, Social history, Recent History (1900 till today), Special Historiographies:, Security and defense, WW II and following years (1940 - 1949), Post-War period (1950 - 1989), History of Communism
Published by: Ústav pro studium totalitních režimů
Keywords: Czechoslovakia; 20th century; postwar period; Prague; political regime; communism; secret police; USSR; photographs;
Summary/Abstract: On March 1, 1948, the original nucleus of the unit of the Communist political police specializing in the surveillance of individuals was created, starting with fourteen men. Shortly before its dissolution, in the year 1989, its final successor – the Surveillance Directorate (Directorate IV of the National Security Corps – SNB), in the strength of 795 servicemen and women of the State Security Service (StB) – was capable of shadowing not only 523 Czechoslovak and other state officers (some even repeatedly), but also a whole range of stationary premises, including twelve embassies. Before starting to fulfill its designated tasks, the Surveillance Directorate, the same as a host of other security services, went through tempestuous organizational and personnel development. At first its equipment for the documentation of surveilled “subjects” was very poor: in September 1949, policemen-tails of Sector V of the State Security Headquarters had at their disposal only one camera, and on top of that a so-called open (undisguised) one, which they did not sufficiently make use of in their operations. Only later, the national enterprise Meopta stepped in to produce very good cameras of a small size with the name Mikroma, which were integrated into the tails’ gear.2 In October 1951, a special State Security school was launched in Veltrusy, whose aim was to prepare instructors of future training courses in the field of surveillance. In March 1953, the “tailing school” (as they themselves called it) linked up with this school. The instruction of young perspective policemen took place over six-month cycles. In individual courses, trainees learned the theory and practice of surveillance, how to take photo-documentation, reveal the identity of individuals (the “ustanovka,” or roughly, “detection,” a term adopted from the Soviet model), and manage collaborators. In addition to perfunctory instruction in the basics of socialist law, they were liberally indoctrinated in the ideology of Marxism-Leninism. The return of the first functionaries from the professional security school in the Soviet Union meant the application of the Soviet State Security Service (KGB)’s experience to a full extent. The Directorate’s school moved first to Vojkov, and later, in 1956, to Slapy.