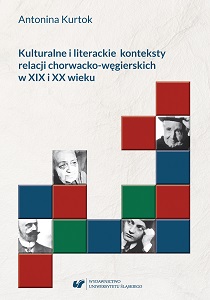 Author(s): Antonina Kurtok
Subject(s): Language and Literature Studies, Studies of Literature
Published by: Wydawnictwo Uniwersytetu Śląskiego
Keywords: Croatian literature; Croatian culture; Croatian-Hungarian relations; Croatia, Hungary
Summary/Abstract: Nations of Croatia and Hungary existed within one state for over eight hundred years. This coexistence – dated 1102–1918 – determined the shape of Croatian-Hungarian relations not only during the union but also after it ended. Interactions involved different aspects of political, social and cultural life of the neighbouring countries. The character of this connection – inter alia its longness, differentiation of languages and entogenetics – makes the coexistence of both nations phenomenal. The period of the Croatian-Hungarian synchronicity can be divided into two noticeable phases: the first one indicates close collaboration. It occurred from the direct threat from Ottoman Turkish side. Later, it was connected with the mutual interests in fight against the Habsburg Monarchy; the second one was a phase of a strong conflict between Zagreb – Budapest because of the intense hegemonic endeavours of the Hungarians. The national self-awareness only contributed to the differentiation of the political interests on both sides. The high point of the Croatian-Hungarian conflict occurred during the reign of Kálmán Tisza (1875–1890), and later when earl Károly Khuen-Héderváry (1883–1903) became a ban of Croatia. Tentions between nations existed long after the Austro-Hungary’s collapse. Disintegration of the old geopolitical order (which took place after the World War I) imposed a natural change in conflict engaging. The dealings got worse and they started to change only with liberalisation of the political space. The aim of the paper is to analyse and describe the chosen matters concerning cultural and literary aspects of Croatian-Hungarian relations. The starting point for the analysis constitute the selected Croatian texts of culture which came into being mostly in the 19th and 20th century. I also investigated multidimensional impact of the Croatian-Hungarian relation on the literary output. Moreover, the presentation of historical, political, social and cultural contexts, among other things, constitutes an inherent part of the dissertation. The exceptionally important role of the authors of the analysed works was included, as their biographies, personal experiences and world view selections reflected on the text’s ideological layer.The paper is divided into four chapters. The first two chapters include the introductory information. They present the relations between the two discussed nations from the very beginning of their existence to 18th century. The presentation was based on intercultural toposes regarding e.g. the Battle of Mohács or the Battle of Szigetvár. The two last chapters constitute an essential part of the thesis. There is a description and the analysis of the selected aspects of the Croatian- Hungarian relation. Those are immanently bound with the socio-political affairs present in belles lettres i.e. written in the 19th and 20th century. Literary works chosen for comparison are texts written by: Ivan Mažuranić (Hrvati Mađarom. Odgovor na proglase njihove od ožujka mjeseca i travnja 1848./A’ Horvátok a’ Magyaroknak feletet az 1848-ik Mártzius és Április magyar híredetményekre), Ljudevit Vukotinović Farkaš (Štitonoša. Pripovědka iz XVI. věka), Mirko Bogović (Frankopan), Eugen Kumičić (Urota zrinsko-frankopanska), Ksaver Šandor Gjalski (Znanstvein heureka Mazalji Miška oraz Izlet Grinczinger Pál-a na Magyar tenger), Živko Bertić (Oszlics Szilárd i njegov certifikat iliti jedan sasvim obični događaj na željeznici), Marija Jurić Zagorka (Kako je bilo), Miroslav Krleža (Zastave, Sprovod u Theresienburgu and Ivan Križovec).Hungarian issues in abovementioned literary works are presented always in the historical and/or political aspect. Discourse of texts written in the 19th century constitutes sui generis barometer of the current relations between Croatia and Hungary. We can either interpret certain historical motives or commentate on current political and social affairs, often hid by satire and irony. Texts written in the 20th century to a great extend refer to common history of both nations; they reassess traditions, mythical characters and stereotypes rooted in the national imagination but they also settle the political practices used by the both sides in the time of their coexistence. The analysed works represent the broad spectrum of literary genres and its variations. Hungarian elements – sensu largo – are exposed in almost every layer of the text. In some of the literary works (e.g. Ivan Mažuranić or Miroslav Krleža texts) contacts with the Hungarian environment – that is personal relations with their authors, culture and pieces of literature – evince as motives, elements of poetics, syntax or stylistics taken directly from the Hungarian surrounding. What is more, there was made the attempt to sketch parallels in the Croatian and Hungarian historicoliterary process already after the disintegration of the long-lasting union. The collapse of the Habsburg Empire indicated big changes in the topography of Central and South Europe – one of the most important was to set new geographical borders. It led into constituting of the new countries with brand new socio-political structure. Furthermore, some of the ethnic groups were territorially and culturally damaged. That is why the dissertation covers also the typology of the Croatian minority groups, which came into existence on the Hungarian land. Its cultural and literary activity was described, as it played a major role in bringing again Croatian-Hungarian contacts to life.