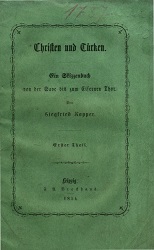 Author(s): Siegfried (Isaac Salomon) Kapper
Subject(s): History, Anthropology, Social Sciences, Geography, Regional studies, Historical Geography, Modern Age, Special Historiographies:, Cultural Anthropology / Ethnology, 19th Century, The Ottoman Empire
Published by: CEEOL Collections / Digital Reproductions
Keywords: Christians and Ottomans;
Summary/Abstract: [PRINTED IN GERMAN FRACTURA SCRIPT] — // — A first-hand account report, based on the notes of a traveller and medical doctor Isaac Salomon Kapper from Prague, describes Slavic nations and Ottoman Empire on their political border. — // — A book in two volumes, written by a traveller and medical doctor Isaac Salomon Kapper from Prague, describe habits, songs and daily life of the Slavic and Turkic nations on the border of Austria, Hungary and the Ottoman Empire, along the river Sava, what is today Croatia and Bosnia, to the Iran Gates, a gorge between Serbia and Romania. — // — Siegfried Kapper (Isaac Salomon Kapper, 1820 - 1879) was a Czech-German writer of Jewish background. Born in Prague he studied philosophy in his home town between 1836-1839 and later medicine in Vienna. After the studies he got employment of a medicine doctor in Karlovac, Croatia, at the time on the border of Austria and Ottoman Empire. Fascinated by the region and the language he later often travelled to the Slavic regions of the Ottoman Empire and to Hungary. In his later years he worked as a medicine doctor in Prague.