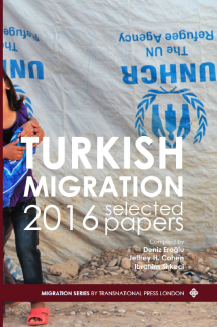 Contributor(s): Deniz Eroğlu (Editor), Jeffrey H. Cohen (Editor), Ibrahim Sirkeci (Editor)
Subject(s): Anthropology, Gender Studies, Media studies, Geography, Regional studies, Civil Law, International Law, Human Rights and Humanitarian Law, Theology and Religion, Islam studies, Higher Education , Evaluation research, Demography and human biology, Migration Studies, Ethnic Minorities Studies, Human Resources in Economy, Socio-Economic Research, EU-Legislation, Identity of Collectives
Published by: Transnational Press London
Keywords: Turkey; Germany; Somalia; migrations; internal migration; minorities; external migration; laws and rights; language and culture; EU accession; economy; labor relation; higher education; Alevi;
Summary/Abstract: Turkish Migration 2016 - Selected Papers - Compiled by Deniz Eroglu, Jeffrey H. Cohen, Ibrahim Sirkeci offers a selection of papers presented at the Migration Conference 2016 held in Vienna, Austria. The pieces collected here are just a sample of the work that was presented at the 2016 Turkish Migration conference. Our meeting, the 4th symposium on Turkish migration, brought together scholars from around the globe to share their research and debate mobility. As in our earlier symposia, we explored demography, sociology, culture and art as they are related to mobility. New this year was an increasing awareness of the “return” of Turks to Turkey from Germany, the challenges faced by Syrian refugees who have settled in Turkey or are passing through the country on their way to Europe as well as issues facing Kurdish minorities, Roma and other minority groups living in or transiting through Turkey. This collection is challenged by two competing poles. One pole is centered in xenophobic nationalism. Around this pole, migrants and refugees are described as criminals, religious fanatics and “moochers" who challenge the working class and the freedoms that come with life in the West. The second pole laments the insecurity that migrants and refugees face. Around this pole, movers are described as victims who lack so much at home. In this example, migrants and refugees are moving because there are no jobs and few prospects for work; civil liberties are proscribed and banned in the face of state imposed limits and there are no opportunities to strike out on a unique path to the future. Complicating both poles is the 24-hour news cycle that denies us the opportunity to understand and analyze. Instead, we are forced to pick one pole or the other. In either case, the outcome dehumanizes the mover, signals their pathos and emphasizes why they are different.

Is a Refugee a Refugee Everywhere? A Comparative Study between Turkish, Italian and Brazilian Law

Working Rights for Refugees: A Comparison of the Turkish and the Australian Models in Achieving Humanitarian and Labour Objectives

The Impact of Mass Migrations on Immigration Policy of Turkey

Displaced People and Right to Evacuation

Deportation of Foreigners in Turkey: What Has Changed After the Law On Foreigners and International Protection and the Creation of the Directorate General of Migration Management? Evidence from Kocaeli

Cross-Border Lives in The Eyes of the Children: A Qualitative Study

Transnational Identity among the Bulgarian-Turkish Migrants in Turkey

Crisis or Opportunity? Public Debate and Perception on Syrian Refugees in Turkey

Not Only a Burden but Also a Contribution: Impacts of Syrians on Turkish Economy

Working Conditions and Informal Employment of Syrian Refugees in Turkey

Attitudes of Turkish youth toward Syrian refugees in respect to youths’ gender, income, education, and city: A Scale Development Study

Education of Turkish People for Social Cohesion with Syrians in Turkey

Crossing Borders-Negotiating Identities in Transnational Spaces: The case of Bulgarian Turks in Germany

An Essay of Meta-Analysis on Seeking Identity of Euro-Turks

The Reception Analysis of the Short Movie ‘‘Bawke”

Migration and Security: Three Capitals and Three Terrorist Attacks as Reflected in the Press

A Collage of Migration: Memory Fragments with a Spatial Pattern

Internal Migration and Perception of Employability: Case of Kocaeli

Studies on Migration and Education in Turkey: A General Evaluation

Transformation of The Migration Theme in Turkish Cinema