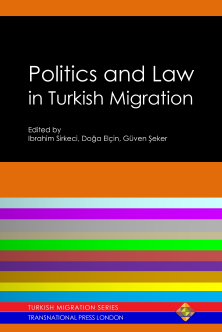 Irregular Immigration in the EU Legal Framework: Where are the Human Rights?

The Making of Immigration Policies in Turkey: An analysis of the Law on Foreigners and International Protection Drafting Process

To What Extent Are Migrant Workers’ Rights Positioned within the Discourse of Human Rights?

In the Nexus of Stigma or Prestige: Politicians with Migration-background

How Berlin’s local politicians of Turkish background perceive their access to party networks and ability to succeed?

After the Hamburg Cell: the Integration Debate and Turkish-German Representation in Post-9/11 Media and Politics

Can Turks be Germans? - Symbolic Boundary Perception of Turkish Residents in Germany

The Second Generation’s Discovery of Transnational Politics via Social Media

Political integration of the German-Turkish youth in Berlin

The role of Turkish community organisations in Berlin: Their role in Turkey-Germany and Turkey-European Union relations