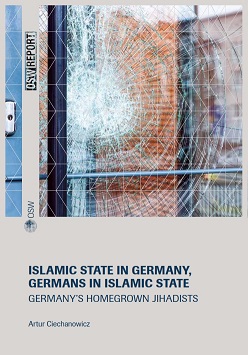 Author(s): Artur Ciechanowicz
Contributor(s): Mateusz Gniazdowski (Editor), Anna Kwiatkowska-Drożdż (Editor), Katarzyna Kazimierska (Editor), Anna Łabuszewska (Editor), Magdalena Klimowicz (Translator)
Subject(s): Politics / Political Sciences, Politics, Social Sciences, Civil Society, Sociology, Theology and Religion, Islam studies, International relations/trade, Security and defense, Studies in violence and power, Radical sociology , Sociology of Religion, Peace and Conflict Studies
Published by: Ośrodek Studiów Wschodnich im. Marka Karpia
Keywords: Germany; Islamic State; jihadists; Islamic radicalism; conflicts; Germany’s internal security; Islamic radicals; Germans; violence and terror;
Summary/Abstract: In Germany, Islamic radicalism is not a new and unknown phenomenon and departures of jihadists to conflict regions have been recorded before. However, the present scale of this phenomenon, alongside threats formulated towards Germany, has made Germans aware of the size of the risk. The Federal Office for the Protection of the Constitution (BfV) considers several hundred individuals who in recent years travelled to fight in the war alongside groups from which they originate to be one of the greatest threats to Germany’s internal security. Despite the fact that they have not organised any attack on a scale comparable to that of the attacks carried out in Madrid, London, Paris and Brussels, through their presence and activity, Islamic radicals permanently residing in Germany exert a certain influence on how the German state and society function. Moreover, their existence is a symptom of a deep problem which is unlikely to be automatically resolved if and when Islamic State collapses, the possibility to travel to the conflict regions is blocked, and the jihadists returning from these trips are taken to court. The problem of the radicalisation of Muslims living in Germany will likely grow in the coming years. The biggest fear experienced by security services and politicians involves this radicalisation translating into acts of violence and terror carried out in Germany, the potential reaction to these by German radicals, and the social and political consequences of such conflicts. Despite not being interconnected, recent attacks involving migrants (the summer of 2016) have made the slogans promoted by anti-immigrant and anti-Muslim groups all the more credible. Topics referred to in these slogans include: the impossibility of integrating Muslims, crime among immigrants, and the state’s failure to fulfil its commitments towards its citizens.