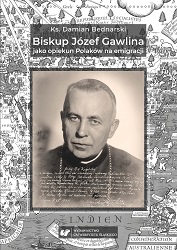 Author(s): Damian Bednarski
Subject(s): Christian Theology and Religion, Theology and Religion, Sociology of Religion, History of Religion
Published by: Wydawnictwo Uniwersytetu Śląskiego
Keywords: Bishop Józef Gawlina; pastoral care for emigrants; Polish Catholic Missions; protector of Polish Emigration
Summary/Abstract: In this monograph the author aims to depict the role of bishop Józef Gawlina as a spiritual leader of Polish emigrants after the Second World War. Bishop Gawlina, who came from the diocese of Katowice, was a pre-war Field Bishop of the Polish Army. He accompanied Polish soldiers outside Poland during the Second World War. After 1945, he remained abroad and when living in Rome he coordinated the life of Polish Catholics, who for different reasons lived outside of their home country. The Pope Pius XII nominated him Protector of Polish Emigrants, a role he served for fifteen years (from 1949 to 1964). Relying on publicly available sources as well as on information which has not yet been widely known, found in Polish and foreign archives, the author explains and specifies the scope of the Church jurisdiction of this hierarch in the consecutive years of his service, and presents his contribution to the pastoral work with emigrants, highlighting that he formed its specific character. Bishop Gawlina’s major achievement was that he developed the structures of pastoral care for Polish emigrants after World War II. Therefore, a big part of the monograph is dedicated to this aspect of his ministry: establishing centres of the Polish Catholic Mission, appointing their rectors and coordinating their work. Setting the time frame presented in the thesis was dictated by the papal decisions and Church decrees, which several times extended and specified the scope of bishop Gawlina’s mission. In this thesis, the author aims to present, as fully as possible, the activity of bishop Gawlina in the field of pastoral care for Poles living abroad. A serious challenge was to document the consecutive stages of the extension of his jurisdiction, which originally covered only Polish soldiers on the territory of Poland and during the peak period it concerned Poles living in many countries on different continents. This was the situation when bishop Gawlina was appointed an ordinary of the Polish Catholics who were leaving Russia. Later, he was appointed an ordinary of Poles in Germany and Austria. The situation changed a bit after 1949, when he became the protector of emigration. For the sake of accuracy, it is worth mentioning that in this capacity he did not have the jurisdiction the ordinaries had. Nevertheless, Gawlina felt his responsibility for the whole clergy and all lay Catholics who maintained their Polish identity while living abroad. He fulfilled these duties with deep commitment until the very last moment of his life. The author refers to bishop Gawlina as “the protector of Poles living abroad”, claiming that it is the most suitable title to describe the mission entrusted to him. The Latin word protector is translated as “a person who shelters, a defender, a carer”. This term was used in the decree assigning responsibility for Polish emigration to Gawlina. The author used analytic-synthetic method in his research. The thesis is divided into five chapters according to the problems. The source documents were found in several archival institutions in Poland and abroad, which were connected with bishop Gawlina’s ministry. Among references, it is especially worth to mention Diaries, which bishop Gawlina wrote during almost the entire time of his ministry. The author found valuable materials in the Archives of the Central Emigration Pastoral Centre in Rome, the Pontifical Institute of Ecclesiastical Studies in Rome, Archives of the Polish Catholic Mission in England and Wales, the Polish Institute and Sikorski Museum in London, Archives of the Archdiocese of Katowice, Archives of the Archdiocese of Warsaw, Archives of the Institute of National Remembrance in Warsaw, and Archives of the Polish Catholic Mission in France. Supplement of the thesis confirms great commitment of bishop Gawlina and it includes tables with the list of visited countries, the list of the Polish Catholic Missions and their rectors, the lists of hierarchs whom bishop Gawlina met during his ministry and the list of his published addresses. The monograph includes also several dozen reference documents from various archives showing the ministry of the bishop of Polish emigrants. The thesis is the first attempt to present comprehensively the role of archbishop Józef Gawlina in organizing the structures of the pastoral care for Poles living abroad and forming the model of pastoral work of the Polish clergy among emigrants after the Second World War.