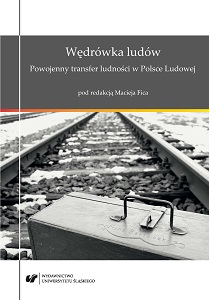 Contributor(s): Maciej Fic (Editor)
Subject(s): History, Recent History (1900 till today), WW II and following years (1940 - 1949)
Published by: Wydawnictwo Uniwersytetu Śląskiego
Keywords: history; migrations; PRL
Summary/Abstract: World War II, post-war political changes, and demographic processes that accompanied them resulted in major changes in Polish society. Within the new borders, now moved to the west, the population of Poland was subject to migration of an unprecedented scale and scope, which effected a transformation of the country into an almost homogeneous state, with no national minorities. This volume aims to present this process on the basis of recent research findings, offering, on the one hand, a synthetic overview of some general or problematic issues (related to a particular factor or region) connected with migration in the first post-war decade and, on the other, an in-depth discussion of selected specific problems.The volume comprises eight articles by historians from research institutions situated in various parts of Poland. The opening paper by Arnold Kłonczyński (University of Gdańsk) discusses Polish emigration to Sweden in the years 1945–1989 and focuses on its consecutive waves, dominated by illegal emigration – first for political and later for economic reasons. Apart from the postMarch emigration, the article refers also to a very interesting problem of the so-called matrimony emigration, which was at its peak in the 1970s and concerned mostly young women getting married to Swedish citizens. Post-war migrations in the Pomerania re-gion are the focus of the article by Małgorzata Machałek (University of Szczecin), who discusses both migration processes of the 1940s and their continuation in the second half of the 1950s. The article by Bernadetta Nitschke-Szram (University of Zielona Góra) analyses two aspects of resettlement processes in Lubusz Land: the displacement of German population on the one hand, and the problem of the so-called native population and their attitudes towards the new Polish government, on the other. Stanisław Jankowiak (Adam Mickiewicz University in Poznań) addresses similar problems, taking into consideration the post-war administrative division of Poland (changed in 1950) and focusing on the area of both the former Poznań province and the eastern Brandenburg counties and Silesia, which after the war became Polish territory. The article by Maciej Fic (University of Silesia in Katowice) offers a synthetic perspective and presents the processes and the balance of migrations in Upper Silesia not only in the years immediately following World War II (and, partly, during the war) but also in a longer postwar period. Moreover, the author refers to the so-called Upper Silesian Tragedy, a taboo until 1989, when the Soviet security authorities deported tens of thousands of Upper Silesian inhabitants. Adriana Dawid (University of Opole) presents the results of a problem-focused source-based study. Referring to the rich archives of the province- and county-level units of the PZPR (the Polish United Workers’ Party), the author demonstrates the attitude of the Opole province party authorities towards migrations connected with the family reunification programme (targeted at Silesians and Germans) to East and West Germany. Jan Pisuliński (University of Rzeszów) addresses the problem of Ukraine population in Poland in the first post-war years. The author focuses on the origin, the process, and the results of the displacement programme (then referred to as evacuation), that is, the resettlement of Ukrainians to the territory of Soviet Ukraine. The article puts special emphasis on the enforced character of both external and internal migrations of Ukrainian people. In the final article in the volume, Arkadiusz Gawroński (State Archives in Białystok) discusses the problem of settling three counties which until 1945 were part of East Prussia, and after the war were included in the Białystok province. The author also makes reference to the preparations for relocating Polish people to more distant regions, the so-called Western and Northern Territories.The articles focus mainly on the first post-war decade, which was the most important period in terms of the effects of migrations. Although the volume does not aspire to provide a comprehensive survey of all problems related to post-war transfers of people, it demonstrates the variety of dimensions they had, their complexity, and their impact on the life of the in-habitants of postwar Poland. In some areas, the book presents the state of the art in the resettlement processes research and identifies those aspects which remain understudied and where further research is needed. Some of the articles also demonstrate the possibilities offered by sources which so far have not been extensively used or investigated, such as documents produced by the governing party, thus pointing to problems which need to be explored in order to gain more insight into the variety of contexts, circumstances, and long-term results of migrations. The volume contributes to the overall picture of migration processes in Central and Eastern Europe in the twentieth century and to the better understanding of the fate of those whom they concerned, and who were often victims of enforced, political decisions.