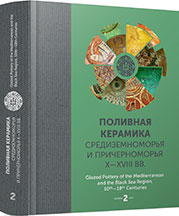 Changing Tastes: from Lustreware to Polychrome Tiles. Exported Pottery from Valencia in Mediterranean Area and around (14th to 18th cc.)

A Byzantine Settlement on the Kalabaklı Valley in the Hellespont: Yağcılar

Immured Vessels in the Church of Panagia Eleousa, Kitharida, Crete