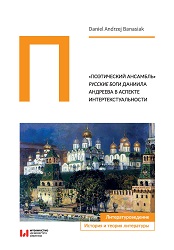 Author(s): Daniel Andrzej Banasiak
Subject(s): Russian Literature
Published by: Wydawnictwo Uniwersytetu Łódzkiego
Keywords: Daniil Andreev; Russian Gods; poetic ansemble; poem; intertextuality; intertext; Russian culture; Russian history
Summary/Abstract: One of the most mysterious figures in the history of Russian literature, mysticism and philosophy is Daniil Leonidovich Andreev (1906–1959), the son of Leonid Andreev, the famous prose writer and playwright of the Silver Age of Russian literature. The research object in this monograph is the magnum opus Russian Gods by Daniil Andreev. He created this work from the beginning of the 1930s to 1955; he repeatedly reworked it, rebuilt compositionally, but did not manage to finish it. Three of its parts have been preserved only in the form of drafts. In Russian Gods we are dealing with a myth project oriented on the values of Russian culture. The anthropology of this myth is based on the spiritual (homo religiosus) and creative (homo creans) human potential, while the poetic world takes on the symbolic cross which horizontally indicates the process of history, and vertically – the interpenetration of real space with the unreal (in heaven and hell). The emphasis on the intertextual approach in the study of the literary text was dictated by the specificity of Andreev’s creativity. Its distinguishing feature is referring to “other people’s “words in their various manifestations. The texts of Daniil Andreev abound in historical, cultural and literary parallels, quotes, reminiscences, allusions, literary associations and other forms of intertextuality. He conducts a dialogue with representatives of Russian culture (from the earliest times to modern times) and literature (Alexandr Pushkin, Fyodor Tyutchev, Afanasy Fet, Mikhail Saltykov-Shchedrin, Ivan Turgenev, Fyodor Dostoyevsky, Leo Tolstoy, Alexandr Blok), as well as with Europeans (William Shakespeare, Jonathan Swift, Johann Wolfgang Goethe, Charles Dickens, Herbert Wells, Richard Wagner).