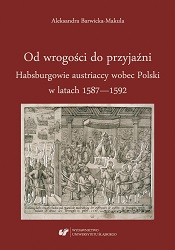 Od wrogości do przyjaźni. Habsburgowie austriaccy wobec Polski w latach 1587–1592
From Hostility to Friendship. The Habsburgs of Austria toward Poland during 1587–1592

Author(s): Aleksandra Barwicka-Makula
Subject(s): Political history, 16th Century, 17th Century
Published by: Wydawnictwo Uniwersytetu Śląskiego
Keywords: Habsburgs; Sisigmund III Vasa; Polish-Lithuanian Commonwealth descriptions
Summary/Abstract: This work presents Habsburg-Polish relations during 1587–1592 in the most exhaustive and comprehensive possible way. Its new approach toward diplomatic relations of the Austrian branch of the Habsburgs with Sisigmund III Vasa and the Polish-Lithuanian Commonwealth is founded on the previously unused sources and a deeper analysis of archival materials, mainly from Vienna’s Haus-, Hof-, and Staatsarchiv, which enabled a reconsideration of a broad range of prevailing assessments and views in historiography.These issues are discussed in four chapters. Chapter one serves as an introduction to the topic. It concerns the main directions and goals of the House of Austria’s foreign policy in the second half of the 16th century and shows the organizational structure and methods of operation of the Habsburg diplomatic service. It also presents Austrian attempts to gain the Polish crown from the 1560s to 1586.Chapter two begins with a characterization of Rudolph II’s reign. Historiographic assessments of the emperor’s engagement in the affairs of countries under Habsburg rule (the Austrian branch) and his activity in the field of diplomacy were recounted. Next, the attempts of the four archdukes: Ferdinand, Ernest, Matthias, and Maximilian to gain the Commonwealth’s throne were presented, as well as their mutual rivalry during the interregnum following Stephen Báthory’s death. This part also highlighted the changing perception of the Swedish prince by the Prague court and its impact on Habsburg diplomacy. Moreover, the course of Archduke Maximilian’s military expedition for the Polish crown, as well as the causes of the election fiasco and the defeat at Byczyna were pointed out.Chapter three presents diplomatic measures undertaken by Rudolph II to free his brother Maximilian and the House of Austria’s stance on the archduke’s imprisonment along with their preferred resolution to the conflict with the Commonwealth. It also raises the issue of Sigismund III’s lack of political independence during the first years of his reign. In this part, a different approach from the one established in source literature to both papal mediation and Cardinal-Legate Ippolit Aldobarndini’s contribution to the peace process was shown. Based on the previously unused record of the Bytom–Będzin parley, which is part of the number 982 manuscript from the Kórnik Library collection, and the correspondence of Austrian commissaries with Rudolph II, barely known to Polish historians, an exact course of the peace talks has been reconstructed.The chapter is concluded with a discussion of the terms of agreement and reaction of the two parties to the news of a peace settlement, analyzed through the prism of ratification procedures.The final part of the book discusses the impact that Maximilian’s refusal to pledge the Treaty of Będzin and Bytom had on Habsburg-Polish relations and personal contacts of Sigismund III with the House of Austria. Moreover, it confronts young Vasa’s offer regarding the succession to the Commonwealth throne made to Archduke Ernst with the plans of the Emperor’s court to gain the Polish crown. The king’s negotiations with the Habsburgs during 1589–1592 are viewed as his attempt to step out of the shade, free himself from Zamoyski’s counsel, and take the initiative and the helm of the Polish-Lithuanian state’s foreign policy. The author sees Sigismund III Vasa’s pro-Austrian stance as a tool to build his own political camp based on the former supporters of the Habsburg candidacy. Chapter four ends with a description of actions of both parties leading to the Polish king’s marriage to Archduchess Anna of Austria, daughter of Charles II of Austria and Maria of Bavaria.This book should inspire further research on Habsburg-Polish relations in the modern era and discussions about the place and role of the Commonwealth on the political map of Europe at the turn of the 16th and 17th centuries.