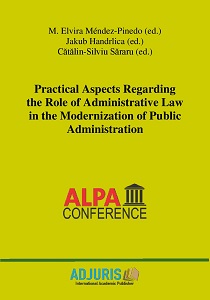 Contributions to the 2nd International Conference`Contemporary Challenges in Administrative Law from an Interdisciplinary Perspective`, May 17, 2019, Bucharest

The European level of research and development funding policy

Considerations on the functions of the European Council

Why do we have to take examples from others?

The identity and legitimacy of the PhD in administrative sciences

The institution of civil servants in Romania, according to current legislation

Aspects on the practical utility of the transfer in the field of the employees and the public servant. Proposals de lege ferenda

Movable cultural heritage. Wisdom of the Earth by Constantin Brancusi: public domain and recovery of possession

Theoretical and practical aspects regarding the modification of the civil servants' employment relationship. Comparative analysis with the employees' situation

Processing of personal data. Case study: a fair balance between the right to information and the right to privacy

Theoretical and practical aspects on liability in administrative law

The collective negotiation and collective agreements – legal task or opportunity, in the management of the legal service relationships of the police officers

Living assistance for people with disabilities

The legal regime of competition in Germany