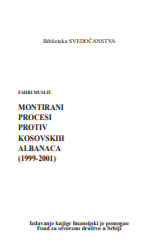 Author(s): Fahri Musliu
Contributor(s): Sonja Biserko (Editor), Seška Stanojlović (Editor)
Subject(s): Politics / Political Sciences, Politics, History, Law, Constitution, Jurisprudence, Criminal Law, Human Rights and Humanitarian Law, Political Sciences, Political history, Recent History (1900 till today), Transformation Period (1990 - 2010), Inter-Ethnic Relations
Published by: Helsinški odbor za ljudska prava u Srbiji
Keywords: Kosovo Albanians; Serbia; political trial; ethnic distance; list of Albanian prisoners; Flora Brovina; Albanian student in Belgrade; Albin Kurti; Đakovica group; Mazreku brothers; 1991-2001;
Summary/Abstract: The book “Framed Trials of Kosovo Albanians” is a product of the author’s three-year coverage of some of hundreds of proceedings against Kosovo Albanians from the autumn of 1999 till mid-2001. As the only Albanian journalist and longstanding Belgrade correspondent for the media in Albanian, the author was keeping the Albanian public posted on those trials via the Radio Voice of America and the Pristine-seated Zeri daily. Though not in detail such political trials usually necessitate, the book factually and authentically speaks of the legal processes instituted against prisoners of war – actually 2,000 Albanian hostages who were lucky enough to survive. The others met their death in prisons. The author finished his manuscript in May 2001 when all trials were practically over and the great majority of prisoners released under the Amnesty Law. However, for objective reasons, it was only in May 2002 that the book came out of print in Albanian. On March 26, 2002, the last group of 145 prisoners was transferred from Serbian prisons to Kosovo under the agreement between the Serbian authorities and the UNMIK administration. Thus, as mother of the well-known political prisoner Nait Hasani put it, “the doors of Serbian prisons were finally and forever closed for Albanians.” The book also reveals the nature and philosophy of Serbian public prosecutor offices and trial chambers that have been moved from Kosovo to Serbia. They did all but administer justice. They were nothing but mouthpieces of the then criminal regime symbolized in Slobodan Milosevic. The Albanians – including numbers of juveniles and women – they took hostage were indicted of terrorism either as members or supporters of the KLA labeled a terrorist organization. Without a single argument and evidence supportive to the charges, they meted out draconian punishment to those people. Many legal experts, independent intellectuals and human rights organizations from Serbia raised their voice against court decisions, calling those trials “the biggest defeat of the Serbian judiciary ever disgracing not only the legal profession but also the Serbian nation as a whole.”