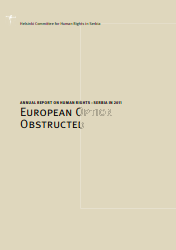 Contributor(s): Sonja Biserko (Editor), Dragan Novaković (Translator), Vera Gligorijević (Translator), Mira Gligorijević (Translator), Mara Živkov (Translator), Spomenka Grujičić (Translator)
Subject(s): Politics / Political Sciences, Christian Theology and Religion, Politics, Social Sciences, Economy, Gender Studies, Law, Constitution, Jurisprudence, Media studies, Human Rights and Humanitarian Law, Communication studies, Sociology, Theology and Religion, Government/Political systems, International relations/trade, Security and defense, Military policy, Social differentiation, Studies in violence and power, Eastern Orthodoxy, Ethnic Minorities Studies, Penal Policy, Socio-Economic Research
Published by: Helsinški odbor za ljudska prava u Srbiji
Keywords: Serbia; judiciary; nationalism; Parliament; army; police; security; regulatory agency; minority; religion; socio-economy; prison system; media; Vojvodina; Sandžak;
Summary/Abstract: EU strategic decision on Serbia’s candidacy is crucial for the country’s further movement towards European integrations. Had it not been for it, Serbia’s poor democratic potential would have been trapped by its strong, populist right-wing. The Serbian society is still incapable to definitely opt for a substantive, democratic transformation and fulfillment of the Copenhagen criteria. Regardless of all the pressures to which it has probably been exposed, the political pivot’s, the Democratic Party’s, failure to progress more towards Europeanization testifies of its lack of states manly leadership and inability for a political U-turn. Having radicalized the Kosovo issue Belgrade has undermined its standing in EU. Mainstream political and intellectual elites do not look to the future. Serbia needs to take stock of its situation. The society’s un-readiness to cope with the past plays into the hands of the political right and its attempts at blocking Serbia’s Euro-Atlantic integration. Rather than accept the reality, the political elite is autistic and trapped by self-pity. As long as its elite role-plays a victim Serbia will not be able to work constructively on its future and the future of the region.