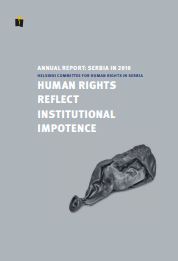 Contributor(s): Sonja Biserko (Editor), Dragan Novaković (Translator), Vera Gligorijević (Translator), Mira Gligorijević (Translator), Mara Živkov (Translator), Spomenka Grujičić (Translator)
Subject(s): Politics / Political Sciences, Politics, Social Sciences, Economy, Law, Constitution, Jurisprudence, Media studies, National Economy, Human Rights and Humanitarian Law, Communication studies, Sociology, Government/Political systems, International relations/trade, Security and defense, Military policy, Social differentiation, Nationalism Studies, EU-Accession / EU-DEvelopment
Published by: Helsinški odbor za ljudska prava u Srbiji
Keywords: nationalism; Europeanization; Serbia; judicial reform; army; police; security service; Parliament; independent agency; legal regulations; religion; economy; media; discrimination; international relations;
Summary/Abstract: The unexpectedly long economic crisis has exposed all the weaknesses – political, economic and social – of the present system, which has not yet made a fundamental break with the legacy of the Milošević regime. The blind alley in which Serbia has found itself again gives rise to serious concern because its democratic achievements, albeit minimal, and its progress towards EU membership are both in question. At 58%, popular support for EU integration is lowest so far. This is largely due to the fact that citizens’ concrete interests are excluded from the authorities’ communication with the public concerning the accession process, as well as to the fact that the process itself has been reduced to a vague state- bureaucratic procedure taking place beyond the reach of the citizens and not taking account of their interests. The process of European integration has been systematically reduced to formal questions concerning legislation, procedure and bureaucratic conditionality. The process is presented to the public in such a way as to show no connection with individuals’ concrete interests.