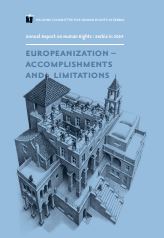 Contributor(s): Sonja Biserko (Editor), Dragan Novaković (Translator), Veronika Bauer (Translator), Vera Gligorijević (Translator), Mira Gligorijević (Translator), Spomenka Grujičić (Translator)
Subject(s): Media studies, Human Rights and Humanitarian Law, Government/Political systems, Security and defense, Military policy, Studies in violence and power, Eastern Orthodoxy, EU-Accession / EU-DEvelopment, Ethnic Minorities Studies, Socio-Economic Research
Published by: Helsinški odbor za ljudska prava u Srbiji
Keywords: European integration; violence; politics; army; police; legal system; Parliament; religion; Hague Tribunal; democracy; minority; Vojvodina; Sandžak; socio-economy; media; international relations;
Summary/Abstract: In 2009, Serbia made necessary progress in defining its future as a European country. The measures taken by the Serbian Government in that direction opened its European perspective. This inevitably provoked adverse reactions by one part of the Serbian elite, which is feverishly defending its position and insisting on the greater-state national project. This specifically refers to its resistance to NATO membership, interpretation of the recent past and defense of Bosnia’s status quo. Regardless of the opening of its European perspective, Serbia is still torn between its wish to join the European family and a strong conservative bloc trying to preserve the model of a patriarchal and populist state. The aggravating factors are a total blockade of the economy, bad privatization, monopolistic status of tycoons and incapable leaders at all levels. A drag on development is also centralism that stubbornly resists any decentralization and regionalization, which are a prerequisite for democratization and the undertaking of responsibility at all levels. Serbia’s progress toward the European perspective also implies a more resolute internal transformation, involving the status of Vojvodina, change of the Constitution, decentralization and regionalization, status of minorities and reform of the country’s media space. This is a prerequisite for breaking away from Milošević’s legacy.