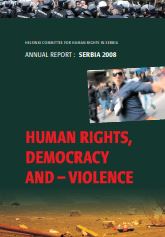 Contributor(s): Sonja Biserko (Editor), Dragan Novaković (Translator), Vera Gligorijević (Translator), Bojana Obradović (Translator), Spomenka Grujičić (Translator)
Subject(s): Law, Constitution, Jurisprudence, Media studies, Criminal Law, Human Rights and Humanitarian Law, Government/Political systems, International relations/trade, Social development, Social differentiation, Ethnic Minorities Studies, Socio-Economic Research
Published by: Helsinški odbor za ljudska prava u Srbiji
Keywords: Serbia; xenophobia; racism; intolerance; army; police; freedom of religion; legal system; socio-economic research; Vojvodina; Sandžak; national minority; media; international relations; human rights;
Summary/Abstract: The trend of institutional disintegration continued in 2008 in parallel with economic standstill, all of which negatively affected citizens’ mood. The pro-European coalition that won the spring 2008 election failed to meet their expectations as it was not politically courageous enough to make a breakthrough in fundamental reforms. In the meantime Serbia, like all other countries in the region, entered recession. The global economic crisis will only aggravate Serbia’s recession caused by domestic crisis. Eight years after Milošević’s ouster it turned out that Serbia had failed to get transformed – for, its elites have basically remained the same and it has not distanced itself from Milošević’s program. The national program has not been defeated yet: its ideology still enjoys strong support from a part of the Serb elite. This is about the elite that had inspired the Memorandum of the Serb Academy of Arts and Sciences and created the program itself. The ICTY has never examined the part academicians, the Serb Orthodox Church, the Writers’ Association, journalists and cultural elite from this circle played in the Greater Serbia project. Their role has not been morally condemned either in Serbia or beyond it. So their activity in the post-Milošević era remained the same. They are still dictating a cultural matrix and “moral” values for the society as a whole. And this is what mainly obstructs establishment of a moral vertical without which the Serbian society can hardly recuperate. In addition, territorial aspirations are still present, which is best mirrored in the case of Bosnia-Herzegovina, i.e. Republika Srpska.