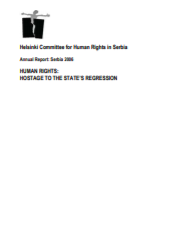 Contributor(s): Sonja Biserko (Editor), Dragan Novaković (Translator), Ivana Damjanović (Translator), Mira Gligorijević (Translator), Vera Gligorijević (Translator), Ivan Obradović (Translator), Spomenka Grujičić (Translator)
Subject(s): Politics / Political Sciences, Christian Theology and Religion, Politics, History, Anthropology, Social Sciences, Economy, Education, Law, Constitution, Jurisprudence, Media studies, History of Church(es), Human Rights and Humanitarian Law, Communication studies, Sociology, Recent History (1900 till today), Theology and Religion, Government/Political systems, International relations/trade, Security and defense, Electoral systems, Cultural Anthropology / Ethnology, Health and medicine and law, Transformation Period (1990 - 2010), Eastern Orthodoxy, Ethnic Minorities Studies, Socio-Economic Research
Published by: Helsinški odbor za ljudska prava u Srbiji
Keywords: Serbia; human rights; political regime; media; culture; Đinđić's assassination; parliamentary elections; security; police reform; Serbian Orthodox Church; economy; healthcare; education; minority; foreign policy;
Summary/Abstract: With Montenegro’s successful referendum on independence and the resolution of Kosovo status on the international agenda in 2006 the process of ex-Yugoslavia’s dissolution moved into the final stage. Serbia was faced with the challenge of constituting and defining herself in terms of state and society. The very fact that the process of ex-Yugoslavia’s disintegration nears its end contributes to consolidation and stability of the Balkans. The decision to admit Serbia – her fluid domestic situation and hesitation to decisively opt for Europe - into the membership of the PfP was meant to round off the security structure of the Balkan region. 1 Membership of the PfP moved Serbia closer to the European option but also implied establishment of mechanisms that could play important role in the event of her destabilization. At the same time, the membership of the PfP figured as a victory over the army’s conservative bloc that has not only stood in the way of its reform but also obstructed the army’s adjustment to new circumstances and the new concept of security under the pretext of defending the state’s sovereignty. Gen. Zdravko Ponos’ appointment the Chief of General Staff completed the package recommending Serbia for speedier access to European integrations. However, the strong lobby that will be refuting and slowing down such orientation is still there.