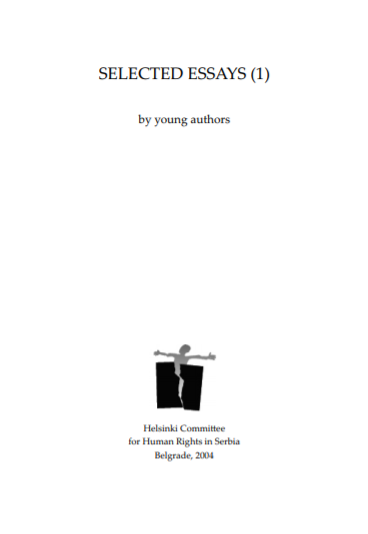 Author(s): Selma Dolovac, Višnja Baćanović, Taufik Abul Suud, Andreja Vražalić, Emina Grbo, István Farkas, Tijana Milošević, Abida Ganić, Saša Đošić, Emilija Cicić, Jovana Radojević, Dejan Pataki, Jelena Mirkov, Marija Živanović, Ivan Dobrić, Tijana Vladisavljević, Bojan Petrović, Erna Oklapi, Radmila Krstić
Contributor(s): Sonja Biserko (Editor), Seška Stanojlović (Editor), Dejan Petrović (Translator)
Subject(s): Politics, Education, Customs / Folklore, Criminal Law, Civil Law, Human Rights and Humanitarian Law, Recent History (1900 till today), Government/Political systems, Electoral systems, Politics and society, Cultural Anthropology / Ethnology, Culture and social structure , Social development, Substance abuse and addiction, Family and social welfare, Nationalism Studies, Welfare services, Economic development, Period(s) of Nation Building, Inter-Ethnic Relations, Ethnic Minorities Studies, Social Norms / Social Control, Identity of Collectives, Wars in Jugoslavia
Published by: Helsinški odbor za ljudska prava u Srbiji
Keywords: human rights; children's rights; Romani people; social development; vicious reality; inter-ethnic relations; democracy; Yugoslavia; Germans; modernism; ethno-symbolism; nationalism; identification;
Summary/Abstract: This is the first collection of selected essays by the authors who attended the courses and seminars the Helsinki Committee for Human Rights in Serbia organized in 2004. Within the three-year project “Building up Democracy and Good Governance in Multiethnic Communities” that is being implemented with the assistance of the European Union, twelve 5-day “schools of democracy” and eight 3-day seminars under the common title “Life and Living in Multiethnic Environments” were held in 2004 in Belgrade, Novi Sad, Kragujevac and Novi Pazar. Over 500 trainees attended these courses and seminars. The project is aimed at capacitating young people – by the means of attractive and interactive courses of training – not only for a life in multiethnic communities that are particularly burdened with the adverse experience of the recent past, mutual distrust and stereotypes, but also for a life in the conditions that mark a modern democracy and reflect its standards. An objective as such implies, among other things, rational perception of notions, developments and trends that are in Serbia still blurred, marginalized and subject to relativism or, moreover, to various and even misguiding interpretations. The Helsinki Committee’s experience testifies this is all about a process that takes time but is worthy of effort – the more so since young people, as evidenced by the selected writings as well, fully perceive it as an imperative need of their own.

IN THE ARMS OF VICIOUS REALITY

THE TITLE IS IN YOUR MIND, IN YOUR HEART, IN YOUR SOUL

DEMOCRACY AND PROSPERITY: A DIRECT OR A REVERSED PROPORTION?

THE GERMANS IN SOMBOR AND ITS NEIGHBORHOOD: PEOPLE NOT TALKED ABOUT, BUT AROUND US - JUST FORGOTTEN, OR CONSCIOUSLY HUSHED UP? -

ETHNO-SYMBOLISM AND CLASSICAL MODERNISM IN THE STUDIES OF NATIONALISM

THE TOWN NEEDS A CHANGE

DO WE KNOW WE ARE A SMALL PEOPLE?

THE POSITION OF THE ROMANIES IN A LOCAL COMMUNITY

THE SOCIAL ATTITUDES TOWARD MARGINAL GROUPS

THERE IS A PEOPLE...

MISFORTUNE IN A MODERN FORM

THE INFLUENCE OF THE HAGUE TRIBUNAL ON SERBIA AND MONTENEGRO

A BIG PROBLEM OF YOUNG PEOPLE