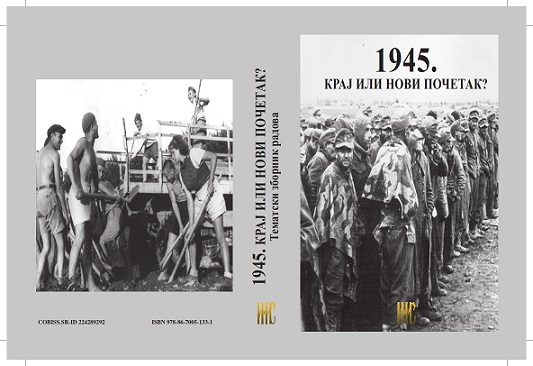 Contributor(s): Zoran Janjetović (Editor), Zoran Janjetović (Translator)
Subject(s): Politics / Political Sciences, Politics, History, Diplomatic history, Political history, Social history, Recent History (1900 till today), Special Historiographies:, Government/Political systems, WW II and following years (1940 - 1949), Fascism, Nazism and WW II
Published by: Institut za noviju istoriju Srbije
Keywords: history; The Second World War; post-war period; economic history; political history; communism; USSR; Yugoslavia; political systems; diplomatic history; international relations; Bleiburg; refugees; Communist Party; Jews; displaced persons; war crimes;
Summary/Abstract: In 2015, the world celebrated its 70th anniversary since the end of World War II. On the initiative of Dr Dragan Aleksić, the Institute for Contemporary History of Serbia decided to join the commemoration of this significant date by publishing a collection of scientific papers that would not only be of a suitable character but would also represent a scientific contribution to the anniversary. It was an honor for me to be the editor of this collection, and my idea of ​​what it should look like revolved around 1945 as a turning point: a time when the war was ending and a new era was beginning. The end of World War II, to a much greater extent than the end of World War I, also marked the end of an old, pre-war world. After World War I, three empires disappeared, a series of new states emerged, democracy and the right of peoples to self-determination became generally accepted ... The end of World War I sowed, however, the seeds of the next world slaughter. It was incomparably greater than the previous or any other war in history, and its end created a world that people who lived in 1914 would never recognize. Europe was devastated, effectively divided between the two victorious superpowers, while the old European powers were losers or mere formal victors: soon after World War II, and in large part thanks to it, the colonial empires of Great Britain and France began to crumble rapidly, giving birth mainly during the first two postwar decades the world as we know it today. [...]

"Bleiburg" and the British Treatment of Croatian Collaborators 1945-48

Утврђивање граница Федералне Србије 1945. године
(The Delimitation of the Borders of the Federal Serbia in 1945)

Svest o krivici i nadmoć pobednika: Mađarska i Jugoslavija 1945-1947. u svetlu mađarskih dokumenata
(Awareness of Guilt and Supremacy of the Victor: Hungary and Yugoslavia 1945-1947 in the Light of Hungarian Documents)

Makedonsko crkveno pitanje 1945-1946. godine (između autonomije i autokefalnosti)
(Macedonian Ecclesiastical Issue in the Period between 1945 and 1946 (Between Autonomy and Autocephaly))