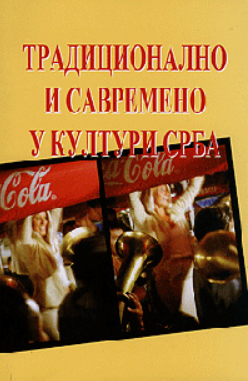 Contributor(s): Dragana Radojičić (Editor)
Subject(s): Christian Theology and Religion, History, Anthropology, Social Sciences, Economy, Gender Studies, Customs / Folklore, History of Church(es), Agriculture, Sociology, Political history, Ancient World, Middle Ages, Modern Age, Recent History (1900 till today), Theology and Religion, Cultural Anthropology / Ethnology, Culture and social structure , School education, Nationalism Studies, Eastern Orthodoxy, Migration Studies, Ethnic Minorities Studies, Identity of Collectives
Published by: Етнографски институт САНУ
Keywords: Serbs; culture; tradition and modernism; ethnic identity; national identity; gender; Orthodox; migration; Orthodox Church; ethnology; cultural anthropology; politics; social and culture structure; history;
Summary/Abstract: The subject o f this scholarly meeting is summarized in its title which gives the best possible formula of all topics dealt with in the said projects. Our goal is to see that, after the first year of work on the projects, these two research and education institutions organize a transparent conference which would provide access to the entire experience related to the project activities and to the results achieved by the research workers after a year-long effort. In the course o f such presentations, a need will arise for a critical overview and discourse o f all the issues and dilemmas encountered hitherto by the scholars. From the very start o f the sign-up period, in July 2001, the problems have, unfortunately, emerged in the formulation of entries in pursuance of the instructions in the project registration form. These were not the only nor the biggest problems. A prolonged waiting for the foreign reviews and for the allocation of research time, which w as considerably reduced as concerns our Institute, resulted in a 30% reduction of funding, and in a year-long struggle to get reimbursement for direct material expenses. Everyone is aware that such projects in the humanities, which have then special national significance, cannot be even conceived o f without fieldwork. As a matter o f principle, it should be pointed out here that the attitude to the humanities has, in the case o f our projects, proved inadequate. After this first year o f research work, in which a number o shortcomings has crystallized as being inappropriate to the nature and spirit o f the humanities, we do hope that in the ensuing stages such shortcomings will be eliminated. W e expect understanding and support from our financier. I am sure that today ’s presentations, a long with the afore said, and in combination with individual experiences acquired by the scholars during their research work in 2002, w ill yield a fruitful discussion which, as a rule, is the best achievement of such symposia.