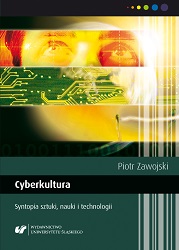 Author(s): Piotr Zawojski
Subject(s): Fine Arts / Performing Arts, Media studies, Culture and social structure
Published by: Wydawnictwo Uniwersytetu Śląskiego
Keywords: cyberculture; cyberspace; art of new media; virtual reality; interactivity; immersion; interface; cyber-art
Summary/Abstract: Cyberculture and critical studies on its history and its becoming a new cultural paradigm constitute one of the most important phenomena of technosociety, whose functioning is determined by new digital media and the internet. A fundamental thesis, specifying the direction of theoretical and interpretative efforts undertaken in the present work, is the conviction that cyberculture is based on the syntopia of art, science, and technology. However, before the definition of cyberculture is formulated, historical contexts of this phenomenon are outlined. The ideas of third culture and New Renaissance, put forward by John Brockman, are treated here as a theoretical basis for the forming of network society. Cyberculture should be considered as the conclusion of the processes initiated by countercultural performances in 1960s. Chapter Two broadly develops the concept of the syntopia of art, science, and technology. The art of technology and technologies of art refer to scientific background, as this phenomenon has its roots in the first manifestations of computer art in 1960s. After cyberculture has been defined in Chapter Three, the place of art in cyberspace and cyberculture is investigated in the following chapter. Chapter Five discusses the key forms of participation for cyber-art, i.e. the problems of interactivity (and interpassivity), immersion, and interface. Chapter Six is devoted to the theory and practice of documenting and presenting the art of digital media in the era of telematic and IT revolution. The key concepts that render the changing conditions of culture that used to be oriented towards data storage, and nowadays towards data transmission, are immateriality, metamediality, and networking. Archives with no physical location, web platforms taking over the function of art galleries, museums, libraries, and repositories set completely new standards of thinking about art in public circulation. The final chapter deals with the issue of virtual museums as a new territory of art, both the one that uses traditional media, as well as cyber-art. In the concluding part of the book, cyberculture is treated as a kind of revitalization of economy and the gift culture proclaiming a new revolution of everyday life in digital reality.