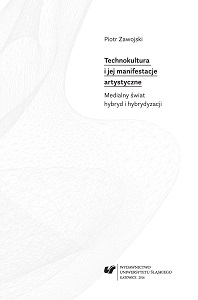 Technokultura i jej manifestacje artystyczne. Medialny świat hybryd i hybrydyzacji
Technoculture and Its Artistic Manifestations. The Media World of Hybrids and Hybridization

Author(s): Piotr Zawojski
Subject(s): Fine Arts / Performing Arts, Media studies, Culture and social structure
Published by: Wydawnictwo Uniwersytetu Śląskiego
Keywords: technoculture; art; culture; media; hybrids; posthumanism; transhumanism; hybridization
Summary/Abstract: Biotechnology delineates today's framework of reflection on technoculture in a time of postdigital and postnetwork society, while decline of the cognitive capacity of the new media categories requires a search for other concepts enabling a description and interpretation of the condition of contemporary technoculture and its artistic manifestations. This process revolves around and is fuelled by various strategies of media hybridization, through which the media hybrids have become prevalent artifacts, both material and non-material, or, objects manufactured in the cultural production, but also conceptual vehicles serving a description of the phenomena of contemorary culture dominated by objects and technological discourses. Hybridity today is one of the crucial categories, around which I attempt to develop my own interpretation of technoculture in the postdigital era. In doing so, I do not adopt the approach of technological determinism, which viewed the process of emancipation of technology in dark tones. I depart on a journey around this world outlining numerous dilemmas concerning the place of art and artists in a continually changing context implied by bio-techno-logical reality. This reality is shaped by the increasingly significant, not to say dominant, tendencies, which are conceptualized in the post-humanist and trans-humanist way of thinking. New media artists use the instrumentation of contemporary technology and, referring to scientific developments, they unceasingly experiment, using new tools of creation for the interpretation of technocultural reality. The triad: art – technology – science along with another triad: art – new media art – post media art are landmarks for my research explorations into major artistic and cultural processes within the practices and theoretical discourses of the media world. "After media" and by means of postmedia, a contemporary face of postdigitalism is developing, in which deep remix becomes one of the fundamental practices of contemporary atists and of each participant in the cybercultural world. The universum of technoculture is processing, very frequently critically and outright, the commonly held to date opinions and judgements of the digital revolution and mediatized reality. The working of the new media, or, in better terms, our work with the new (post)media is an example of unending work in progress. This is discussed in the third part of the book, which presents various artistic strategies of eminent new media artists. These strategies show that it is possible to pursue different ways of artistic creation without abandoning scholarly, cognitive, research and philosophical ambitions. Ken Goldberg, Stelarc, Christa Sommerer and Laurent Mignonneau, Ryoji Ikeda and many artists whom I present in the last chapter devoted to hybrid art, represent different tendencies and movements in media art, but, at the same time, they are only a departure point for deliberations reaching far beyond their artworks. I am considering the status of new media art, technoart and hybrid art, which, possibly, should be regarded as the most symptomatic manifestation of transformations within media art, although crossing the boundaries of the genre, type (analogue vs. digital, traditional vs. new media) and transmediality are its defining features. These artists (the ones discussed in detail in extensive chapters devoted to their work, and the ones discussed only briefly) are well-known to anyone interested in media art issues. However, quite symptomatically, none of them has ever won as much acclaim in the, broadly understood, art world as artists pursuing traditional art forms including painting, sculpture and even architecture. Why? Because, say, despite the ubiquity of the new digital media in social space and communication, the new media art still constitutes the margin of contemporary art. In a way, in this book, I myself attempt at re-evaluation, or rather, greater recognition of the contemporary art making use of the cutting-edge media technologies. Their distinctive feature at present is being dominated by hybrids, hybridity and hybridization processes, yet, in fact, I mean something more than that. I attempt at taking a view at contemporary technoculture through the works of contemporary artists who are treated marginally and as a ballast of technological transformations, whereas, in fact, they are the true avantguarde of the civilizational and cultural transformations of the contemporary world.