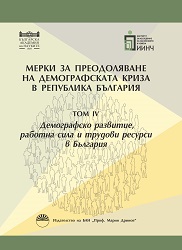 Author(s): Kremena Borisova-Marinova, Margarita Atanassova, Iskra Beleva, Maria D. Jeliazkova, Ergyul Tair, Nickolay Tsekov, Adriana Hristova, Silviya Nikolova, Hristo Banov
Subject(s): Social Sciences, Sociology, Demography and human biology, Economic development
Published by: Институт за изследване на населението и човека - Българска академия на науките
Keywords: Labour force; labour resources; demographic reproduction; participation in education and training; industrial structure and flexible forms of employment; labour force and workplaces quality; regional differentiation.
Summary/Abstract: Since the start of the new millennium, the development of labour force has been credited for raking among the top priorities of today faced by both Bulgaria and a large number of European countries. The National Development Programme called Bulgaria 2020 is a good argument that any issues having any bearing to the status and development of labour force in Bulgaria are already being included as an obligatory part of political reports dedicated to the progress of Bulgaria’s development. These however should fit in the core of the long-term concept for economic development of this country and be bound to the other aspects of the economic strategy and of the demographic development strategy alike. This necessity is turning into an increasingly urgent imperative and a challenge for the future of this country as, given both the method and the degree of solving the issues relative to the development and the effective use of labour force, this will be key how Bulgaria’s socio-economic development over the forthcoming decades will look like.This study is an attempt to make a multi-aspect interdisciplinary perscrutation of Bulgaria’s labour force development. Several bottlenecks in labour force’s development were identified, all of them having key significance for their management through the decades to follow: growing imbalances in the demographic parameters of labour force and labour resources, including increasing regional differentiation; slow increase in the level of participation in education and training and disturbing warning about a sort of ‘rejuvenation’ of non-active population with low education levels; slow pace of restructuring of employment to higher value added sectors and lack of development in flexible forms of employment; discrepancies in the pair labour force quality–workplaces quality.Beyond the limits of this study, there are remaining two bottlenecks, which are extremely important for Bulgaria: health status of labour force and of non-active population in working age and the variety of aspects of labour force’s life quality.A main objective of this study is to determine the most important directions of the necessary actions and to suggest specific measures to improve the current applicable legislation and policies in the field of employment and economic activity in the country through the prism of the key issues in the development of labour force and labour resources. Implementing this goal, the study was conducted in two stages, and therefore the structure of the statement is in two parts.The first part of the study is aimed at evaluating the significant demographic, economic and social parameters of the labour force and labour resources in the country, the current applicable legislation and the policies in this area during the period 2006–2016. In order to achieve this objective, various research tasks in the above-mentioned problem areas were implemented: statistical analysis of the status and trends of the labour force and the working age population; analysis of the legislation and of the policies and measures in the problem domain; assessment of the adequacy of the legal framework and the policies and measures applied to the current state of the country’s labour force and prospects for its development.The main objective of the second part of the book is to verify and clarify the hypotheses formulated in the previous analysis and concerning the necessary changes in the current legislation and the policies in the field of workforce development and labour resources in the country. To achieve this goal in the aforementioned four problem areas, the following research objectives were implemented: preparation of design and tools for empirical quantitative research on labour force and labour resources; preparation of design and tools for qualitative research; planning and conducting qualitative research and additional analyses demonstrating or rejecting hypotheses in the field of labour force development; analysis and summarising the results of studies carried out; formulating proposals for legislative changes and policy changes in labour force development in the country.Given today’s conditions of strong competition among developed countries to attract workforce what is important is the growing importance of the adequacy and effectiveness of the policy on management of qualitative and quantitative parameters of the labour force. As is known, demographic processes are influenced by the huge number of intertwining factors.Therefore, the proposed packages of measures could affect labour force development and positive impact on demographic behaviour of individuals only if these are applied as a complex and in combination with other measures affecting the overall condition of the quality of work and life of Bulgarian citizens.