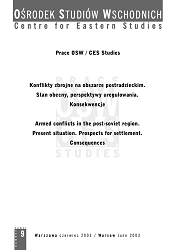 Author(s): Krzysztof Strachota
Subject(s): Politics / Political Sciences, Politics, Military policy, Peace and Conflict Studies
Published by: Ośrodek Studiów Wschodnich im. Marka Karpia
Keywords: post-soviet Region; armed conflicts
Summary/Abstract: 1. Unresolved conflicts continue to smoulder in Transnistria, Chechnya, Abkhazia, Nagorno-Karabakh and South Ossetia. "Para-states" have formed in most conflict-affected areas. These have grown to become permanent players in the region. In Chechnya, guerrilla fights continue in the wake of the Russian army's siege of the republic. The conflict in Tajikistan ended in 1997 and the normalisation process is currently under way. 2. Each of these conflicts has entailed profound political, social, ethnic and economic changes, as well as affecting other spheres of life. Presently, it is impossible to return to the pre-conflict situation. The "para-states" have fortified their independence and are no longer controlled by the external powers on which they depended in the initial phases of the conflicts. 3. Unresolved conflicts, including those of Transnistria, Chechnya, Abkhazia, Nagorno-Karabakh, South Ossetia and, until recently, Tajikistan, have an adverse effect on the situation in the region. They hinder political and economic development of the affected countries, lead to the brutalisation of political life and breed instability by providing save havens for organised crime, terrorism, etc. They are also the cause of large-scale migration problems. However, with time, these negative effects become less and less turbulent. 4. So far, attempts at solving most of the conflicts (Transnistria, Abkhazia, Nagorno-Karabakh, South Ossetia) have failed to produce results other than cease-fires. Permanent settlement could not be achieved, neither through the use of force nor by way of negotiation. The power and independence of the "para-states", hard-line leaderships on both sides, and finally, military weakness of the metropolises consolidate the state of suspension. The conflict in Tajikistan was settled using political methods, and the normalisation process is progressing in a satisfactory manner. Chechnya has been conquered militarily by Russian troops and Moscow is now implementing its model of imposed "normalisation", but it does not have full control over the republic and cannot contain the growing problems induced by the conflict, such as the emergence of Chechen terrorism. 5. Some of the negative consequences of the conflicts are gradually being abated by the evolution in Russia's policy towards them (Russia is gradually ceasing playing on the conflicts as foreign policy instruments and is shifting towards political and economic measures). Also instrumental to this are the increasing involvement of the US and, to a smaller extent, the EU, in regional security (as part of their struggle against terrorism), as well as the growing strength of state systems and the development of political and economic co-operation between the conflict-affected republics (for example, the construction of the Baku-Tbilisi-Ceyhan pipeline, the TRACECA programme). In the longer term, these tendencies may also help in resolving the actual conflicts themselves.