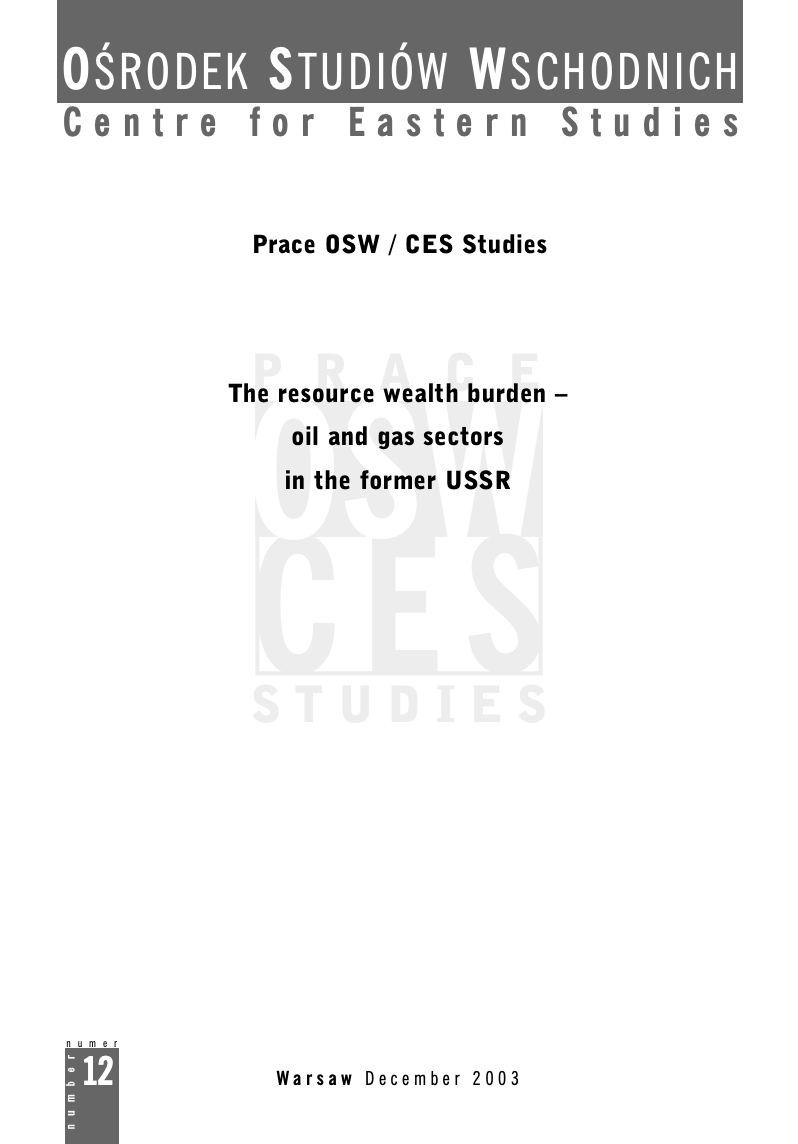 Author(s): Agata Loskot-Strachota
Subject(s): Politics / Political Sciences, Politics, Governance, Geopolitics
Published by: Ośrodek Studiów Wschodnich im. Marka Karpia
Keywords: USSR; Russia
Summary/Abstract: The former USSR area plays a great role in the international oil and gas market. Russia is a real gas giant, with the richest deposits of this material in the world. Russia is also the main exporter of natural gas to many European countries. Keeping a strong position in this market remains a priority for the Russian Federation's economic policy. Europe is a very attractive region because its demand for gas is expected to grow steadily, while its own gas production keeps decreasing. In the long term, the Far East will be an important market for Russian exports, too. According to estimates, demand there will grow even faster than in Europe. Caspian gas producers, for the time being, can not really compete with Russia in this field, and this status quo will most probably be preserved in the nearest future. The post-Soviet countries also have substantial oil deposits. Among CIS members, Russia has the richest oilfields; Kazakhstan comes second, with large proven deposits of petroleum. In the Eurasian market, raw materials coming from the former USSR area are the major alternative to oil produced by OPEC countries. Russia does not belong to the cartel, and during the last two years, when international oil prices remained high, it continued to substantially increase both the production levels and exports. European countries are the main consumers of Russian petroleum, yet in the future, Russia may strengthen its role in such markets as the USA, Japan and other countries trying to become less dependent on OPEC oil. A boost in production and exports by Kazakhstan and Azerbaijan, countries situated by the Caspian Sea, should also be expected in the next five years. The significance of this region for the international market is bound to grow when new oil transport routes, independent of Russia, are opened (see chapter Export potential of the post-Soviet region). This collection of papers attempts to give an accurate and clear description of the main characteristics and of the key problems pertaining to the oil and gas sectors in the former USSR. It is aimed at showing the wealth and production and export opportunities on the one hand and at outlining a number of problems that now limit the development of trade in energy materials in this region and might impede it in the future. These issues seem to be of particular importance in the context of the dilemmas facing the Polish and European energy security policy. This report consists of five studies, focusing on: the resources and export potential of the Commonwealth of Independent States countries, Russian policy towards the entire oil and gas sector in the former USSR area and in the countries of the former Eastern bloc, and the role the energy resources potential plays in Russian foreign policy. Also, the studies outline the situation of the so-called transit countries, i.e. the ones controlling major export pipelines for Russian oil and gas, discuss the importance of foreign direct investments for the oil and gas sectors, as well as the opportunities and dangers that natural resource wealth might pose to the development of CIS countries. In terms of geographic coverage, the studies pertain to both key oil or gas producers (Russia, Kazakhstan, Azerbaijan and Turkmenistan) and the important transit countries for energy resources from CIS area (Ukraine, Belarus, Lithuania, Latvia and Estonia). While working on this project, we used the generally available literature, statistical yearbooks, specialist press and agency and internet news bulletins. We also want to acknowledge the valuable comments from CIS countries oil and gas experts, whom we to talked to while working on this project.