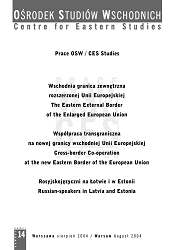 Author(s): Rafał Sadowski, Joanna Hyndle-Hussein, Miryna Kutysz, Bartosz Cichocki
Subject(s): Politics / Political Sciences, Politics, Public Administration, Geopolitics
Published by: Ośrodek Studiów Wschodnich im. Marka Karpia
Keywords: European Union; EU; Eastern External Border; Latvia; Estonia
Summary/Abstract: I. The new eastern border of the European Union The European Union's new border with Eastern European countries, Russia, Belarus and Ukraine, is approximately 3000 km long. It has vital meaning for the Union in terms of security as well as for social and economic reasons. Unlike the southern maritime border of the EU, the eastern land border poses a number of different challenges. These pertain, above all, to issues of ''soft security'' (i.e. smuggling, illegal migration, organised crime, etc.), but also to the fact that all the most important communication and trade routes connecting Europe with Eurasia cross this boundary. The borderline goes through areas inhabited by people of similar cultural and historical backgrounds, who are, in a way, socially and ethnically related. It therefore plays a much greater role in social terms than the southern border. The northern part of Estonian-Russian borderland on the Estonian side is mostly inhabited by Russians, and in the southern part on both sides by the Setu ethnic group. A Belarussian minority lives in the border regions of Latvia (the Daugavpils and Kraslava regions), Lithuania, and Poland (the area around Bialystok and Biala Podlaska). On the other hand, Poles live in the western part of Belarus (the Hrodna and Brest districts) and Ukraine (the Lviv district). In turn, Ukrainians live in eastern Slovakia. The Trans-Carpathian region of Ukraine is partly inhabited by Hungarians. The EU border also divides communities which used to live in one country in Soviet times and have preserved social ties (the Baltic States' borders with Russia and Belarus). A characteristic of the areas on both sides of the new EU eastern border is its peripheral nature. Mostly rural communities whose economic indicators are much worse than in the rest of the country, they are also undersubsidised regions, with substantially higher unemployment levels than the country average, and lacking large industrial centres (except for the cities of Narva, Hrodna, Brest, Bialystok, Lublin and Lviv). This peripheral character contributes to the development of cross-border contacts and mutual attraction, especially in business terms. Cross-border trade, both legal and illegal, is an important source of income for local inhabitants.