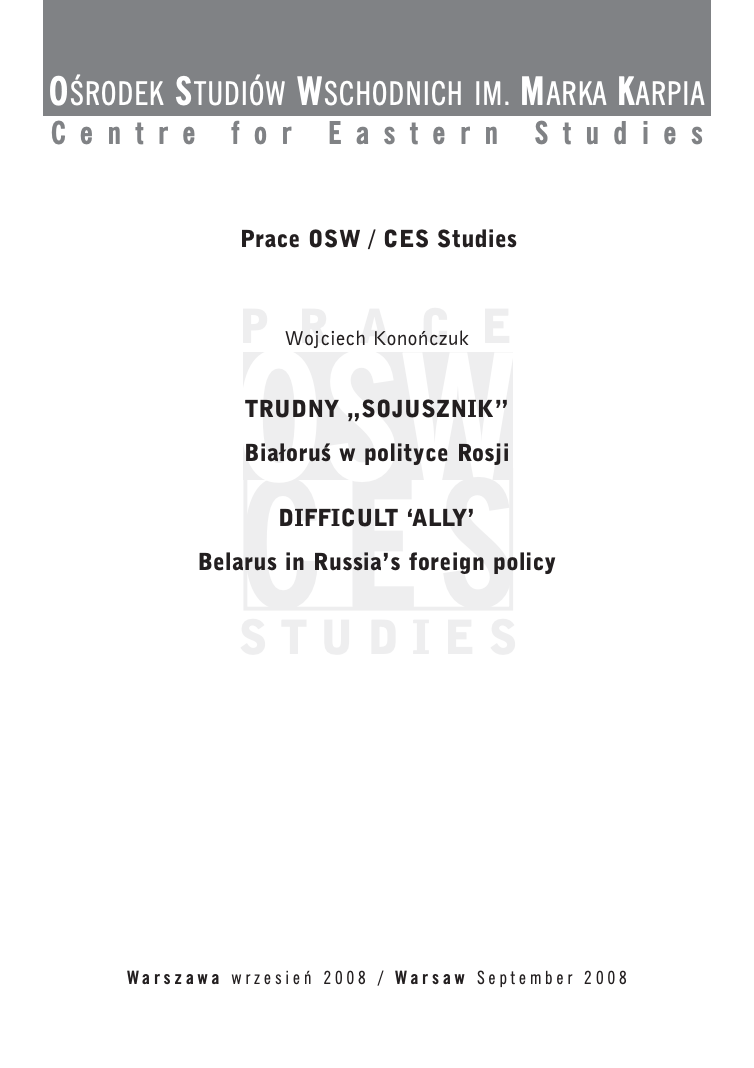 Author(s): Wojciech Konończuk
Subject(s): Politics, Geopolitics
Published by: Ośrodek Studiów Wschodnich im. Marka Karpia
Keywords: Belarus; Russia; foreign policy
Summary/Abstract: Belarus holds a special position in Russian policy due to its geopolitical, military and transit significance. Russia's influence and position in the entire Eastern European region largely depend on how strong Russian influence in Belarus is. The process of Russian-Belarusian integration began in 1994, when Alyaksandr Lukashenka came to power in Minsk. At the time, Russia's policy towards Belarus was based on twomain assumptions. Firstly, the Kremlin supported Lukashenka's authoritarian regime. This allowed Russia to keep Belarus within its orbit of political influence and prevent other states from getting involved, since an undemocratic Belarus could not count on closer contacts with the West. Secondly, Russia heavily subsidised Belarus with cheap energy resources (way below the market price) and allowed the duty-free access of Belarusian goods to its market. Thus Belarus became a kind of 'sponsored authoritarianism' with a specific economic model, owing its existence to Russia's economic and political support. At the same time, Moscow's key objective in its policy towards Belarus was to make Minsk accept the Russian conditions concerning integration, which would in fact lead to Belarus' incorporation by the Russian Federation. However, Belarus managed to maintain its sovereignty, while Alyaksandr Lukashenka bandied the term 'integration' about in order to maintain the preferential model of his state's relations with Russia. Russia's intention to alter the nature of these bilateral relations became evident when Vladimir Putin took power in 2000. However, Moscow faced Minsk's refusal to accept the Russian integration plan (which, among other measures, provided for the takeover of Belarusian economic assets by Russian companies). This forced Russia to use its main tool against Minsk: the supplies of cheap gas and oil that had been sustaining Belarus' archaic economy. The most serious crisis in Russian-Belarusian relations broke out at the beginning of 2007, following Moscow's decision to raise the energy resource prices. This decision marked the beginning of the application of market principles to settlements between Moscow and Minsk. The key question this study is meant to answer concerns the consequences of the aforementioned decision by Russia for future Russian-Belarusian relations. Are they at a turning point? What are Russia's policy objectives? What results can come from the process of moving mutual relations onto an economic footing? What policy will replace Russia's 'sponsoring of Belarusian authoritarianism', which it has been implementing since 1994? Finally, what further measures will Russia undertake towards Belarus? The current study consists of five chapters. The first chapter offers a brief presentation of Belarus' significance and position in Russian policy. The second analyses the development of Russian-Belarusian political relations, first of all the establishment of the Union State, Belarus' position in Russian domestic policy and Russia's influence on Belarusian policy. The third chapter presents bilateral economic relations, primarily energy issues. The fourth chapter describes the state and perspectives of military cooperation between the two states. The fifth chapter presents conclusions, where the author attempts to define the essence of the ongoing re-evaluation in Russian-Belarusian relations and to project their future model.