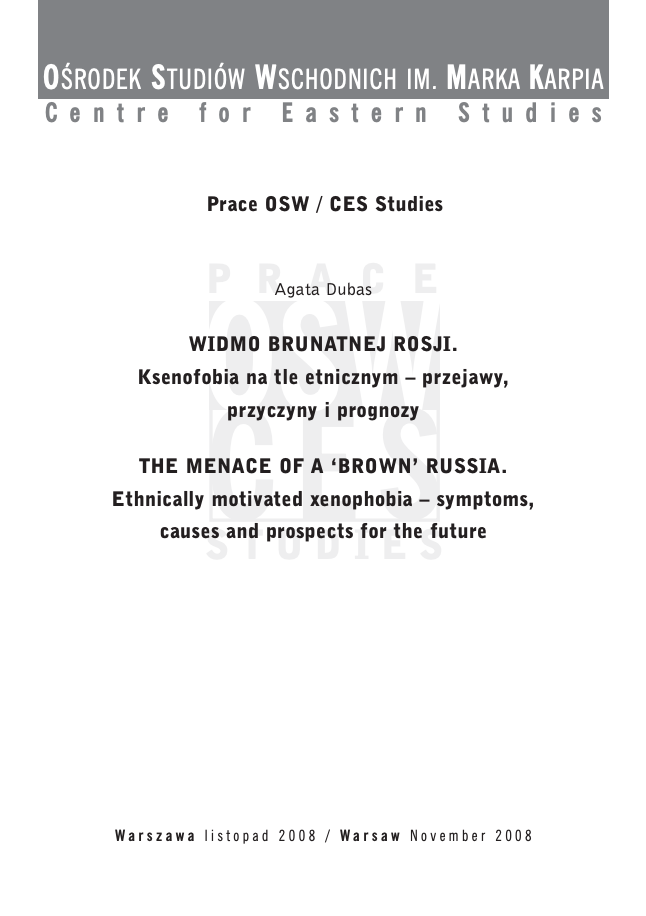 Author(s): Agata Dubas
Subject(s): Politics / Political Sciences, Politics, Governance, Public Administration
Published by: Ośrodek Studiów Wschodnich im. Marka Karpia
Keywords: Russia; xenophobia
Summary/Abstract: In late August and early September 2006, Kondopoga, a town of 40,000 inhabitants in Russia's Republic of Karelia, became the scene of ethnic riots. The pretext for the outbreak was one specific incident - a fight in a café between the local Russians and a group of Chechens and Azeris, in which two Russians were killed. Several days later, members of the nationalist organisation Movement Against Illegal Immigration arrived in the town and skilfullymanipulated public sentiments by organising rallies in which the demonstrators' demands included the expulsion of all Caucasian immigrants from the region. At night-time, property belonging to members of the Caucasian community was burned or destroyed. It was only several days later that the tense situation was calmed. This event soon took on a symbolic force and received a great deal of attention throughout Russia. For some, mainly Russian nationalists, Kondopoga became a 'hero city' and a harbinger of national revival, whereas for others, in particular human rights activists, it was a model example of the outbreak of openly chauvinistic sentiments among ethnic Russians. The events in Kondopoga, together with several other widely discussed incidents in 2006 (including the attack on 21 August in Moscow's Cherkizovskiy Market where most of the merchants were immigrants from Asia, and 10 people were killed and nearly 50 injured), put the problem of rising xenophobia in Russian society at the centre of attention. This paper focuses on the ethnic dimension of xenophobia, as understood as aversion, fear or hostility vis-a-vis members of other nationalities, as well as the related radical nationalist ideas founded on the concept of the dominant (and often discriminatory) role of the Russians in the Russian Federation, with reference to racism or neo-Nazism. This text primarily presents xenophobia as an enormous social problem in today's Russia, which is not being addressed at the moment, but is instead being exploited by both the authorities and radical nationalist groups. This paper attempts to describe and understand the causes of xenophobia and the reasons for the popularity of extremely nationalist views among ethnic Russians. It also seeks to estimate the scale of the problem and the potential threat it may create in the future. The first part describes the different manifestations of xenophobia in presentday Russia. It identifies the groups most exposed to ethnically motivated violence and persecution, as well as the most xenophobic communities, and discusses the scale of the problem and its specific characteristics in the context of Russian reality. The second part looks into the underlying causes of xenophobic sentiments among Russians, while the last chapters delve into the authorities' attitude towards the problem and seek to answer the question of whether radical nationalist ideas may in future come to dominate Russia's political scene.