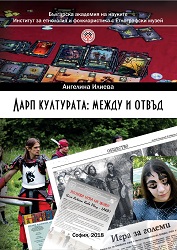 Author(s): Angelina Ilieva
Subject(s): Anthropology, Social Sciences, Fine Arts / Performing Arts, Customs / Folklore, Visual Arts, Sociology, Cultural Anthropology / Ethnology, Culture and social structure , Globalization, Sociology of Art, Identity of Collectives
Published by: Институт за етнология и фолклористика с Етнографски музей при БАН
Keywords: larp culture; games; subculture; identity;
Summary/Abstract: This text is a monographic study of live action role-playing games (commonly called larp games): a type of games played live, in physical space, and through the immediate, active interaction between players. The study explores two directions, elaborated in its two parts, each with its own specific focus, goals, and scope. The first part focuses on games in culture; the second, on games as culture. The first part presents the various types of role-playing games, their functions in cultures, and the cultural traditions inherited by them. The second part contains a detailed analysis of a local gaming culture—the Bulgarian one—through its constituting aspects of form (the game), processes (playing), and actors (players). The first part places role-playing games within the scope of anthropology and examines them through the comparative perspective typical of cultural anthropology. We deduce and substantiate six functions of larp games from a theoretical and philosophical standpoint. The ritual function breaks the quotidian rhythm of life, changes the commonplace structures and relationships, engenders a markedly “other” (albeit temporary) reality, which imposes uncommon types of behavior. The narrative function is an aspect of players’ subjective perceptions, of their direct involvement in the story, simultaneously creating it and experiencing it in an unmediated manner. The escapist function is portrayed, not only as a possible “escape from reality, ” but also as a romanticist criticism of modern reality. The educational function considers the uses of games for the practical acquisition and accumulation of knowledge and skills, but also for exploring ideologies, suggesting or provoking particular values, and shaping worldviews. The therapeutic function focuses on the notion of ‘catharsis, ’ as a healthy psychological and emotional release for both individual players and the group/community as a whole. The expressive function defines playing as a method for individual and collective expression, a medium with the potential to make art forms. We explore the evolution and varieties of the genre larp game as it has been interpreted and enacted on various regional playing scenes: in North America, Great Britain, France, Germany, Scandinavia. We examine the principles of avant-garde Nordic larp as a specific design ideology insistent on authentic experience, artistic storytelling, and topicality in the games it constructs. We describe the major traits of the Eastern European larp scenes, with an emphasis on the unique Russian larp culture. The second part defines Bulgarian larp culture through five groups off actors: 1) genesis and main trends; 2) basic structures and interactions established on a meta-gaming level; 3) values and norms shared by the players; 4) actual or latent conflicts and crises; 5) impact of other forms of games or other larp cultures. At first, we analyze the game as a jointly generated reality, consisting of various layers and levels: the material environment of objects and the language describing it; the individual perception and performance of a role; social structures and interactions. Next, we examine playing as a communication process: playing with meaning, the cultural “languages” of interaction, and the participants’ subjective interpretations of game events, expressed through stories. Finally, we present the social structuring of the Bulgarian larp scene as a community of clans and analyze the unique social world of larp players. The conclusion highlights certain significant sociocultural trends in the contemporary world, reflected in the culture of role-playing games: modern people’s propensity for ‘playing’ with reality, creating and inhabiting alternative worlds; the ever growing need to engage with the world actively and experience it fully, the increasing importance of direct personal experience; the specific attitude towards artistic content and art as a whole, the everyday need for artistic expression.