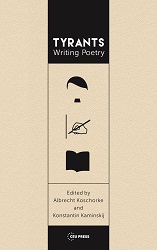 Contributor(s): Albrecht Koschorke (Editor), Konstantin Kaminskij (Editor)
Subject(s): History, Poetry, Political Sciences, Sociology of Culture, Sociology of Politics
Published by: Central European University Press
Keywords: Politics and literature; Dictators in literature; Sovereignty in literature;
Summary/Abstract: As conventional understanding would have it, the sometimes brutal business of governing can only be carried out at the price of distance from art, while poetic beauty best flourishes at a distance from actions executed at the pole of power. Dramatically contradicting this idea is the fact that violent rulers are often the greatest friends of art, and indeed draw attention to themselves as artists.Why do tyrants of all people often have a particularly poetic vein? Where do terror and fiction meet? The cultural history of totalitarian regimes is unwrapped in ten case studies, in a comparative perspective. The book focuses on the phenomenon that many of the great despots in history were themselves writers. By studying the artistic ambitions of Nero, Mussolini, Stalin, Hitler, Mao Zedong, Kim Il-sung, Gaddafi, Saddam Hussein, Saparmurat Nyyazow and Radovan Karadzic, the studies explore the complicated relationship between poetry and political violence, and open our eyes for the aesthetic dimensions of total power.The essays make an important contribution to a number of fields: the study of totalitarian regimes, cultural studies, biographies of 20th century leaders. They underscore the frequent correlation between tyrannical governance and an excessive passion for language, and prove that the merging of artistic and political charisma tends to justify the claim to absolute power.

The Tyrant with His Back to the Wall

A Poor Despot Descends to Hell

The Principle of Single-Handed Tyranny

“Nothing Is Forbidden in My Faith”