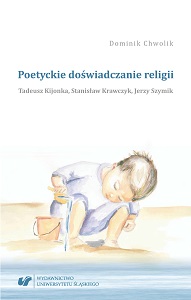 Author(s): Dominik Chwolik
Subject(s): Literary Texts, Studies of Literature, Philology, Theory of Literature, Sociology of Religion
Published by: Wydawnictwo Uniwersytetu Śląskiego
Keywords: poetic experience; religion; Tadeusz Kijonka; Stanisław Krawczyk; Jerzy Szymik
Summary/Abstract: In his work, the author discusses the issues of the religious sphere associated with every human being and their everyday existence, regardless of the different doctrines or points of view. Furthermore, these issues find their way into literature which aims at reflecting human life. Such poetic experience of religion can be seen in the works of Tadeusz Kijonka, Stanisław Krawczyk and pr. Jerzy Szymik on which the author based his research.The author reviews the classic religious study works, such as the theories of Rudolf Otto, William James or Mircea Eliade who view the contact with the sacrum through the prism of the feelings associated with it. Given, however, the distant time of the theories’ development, the author does not abstain from mentioning other deliberations resulting from the poets’ inveteracy in the Catholic thought circles. The poems by Kijonka contain references to JohnPaul II, whereas the theology of Benedict XVI is significant when attempting to interpret the works of Szymik.The three aforementioned poets, although associated with Silesia (with its’ traces visible in their works) do not represent, in the authors’ view, the ‘Silesian religiousness’ stream. It does,however, serve the purpose of evoking that which is universal or it may become a pretext to reflect upon experiencing the sacrum and profanum.While analyzing the work of Kijonka, the author points out, above all, the contrast between the faith of a trusting child and that of a doubtful adult (which is to be understood as a reflection of the struggle with reality). The poet often returns in his memories to his childhood, irreversibly lost (as the past Christmas) once the border (of the forest or city) is crossed. In his works, an adult is depicted as someone who feels abandoned and looks at the sky expecting a miracle. They yearn to return to the distant past or even to the heavenly state. God, in Kijonkas’ writings, is both close and distant. The author of Time, places and words (org. Czas, miejsca i słowa) deals with the matters of one’s body, sickness (even his own one) and death, as well as with the image of the mother (both earthly and heavenly — Mary).In the chapter devoted to Krawczyk, the author discusses the issue of a man standing in the centre of a world undergoing destruction, where the surface resembles a volcanic landscapeand the protagonist wanders in search of faith. In his poems, the poet dwells upon the matters of the mystery of the interrelation of both man and God (the incarnation of Christ, co‑experience of suffering), the human fate and ‑ what is significant ‑ the mysteryof his own (the creators’) ‘self’. He performs a self‑evaluation.In Vowels and colours (org. Samogłoski i kolory), Krawczyk focuses also on the intriguing, incorporated in the religious codes of his poetry, thread of the woman (through the comparison of his wife and Eve from the paradise).The last section of this thesis is associated with the wor of Jerzy Szymik. The author especially focuses on the prospect of the man continuously getting nearer to God through everyday life, as portrayed by the priest‑poet.Included in the work of Szymik are the categories of suffering (Incarnation and its mystery, similar to Krawczyk), sickness (similar to Kijonka — his own state), death, but also priesthood, the Resurrection and even common, everyday events. The description of the image of Mary or the references to journeys, both local ones to Pszów or Lublin and more distant ones to Italy or the United States, are not different. The author of Gods’patience (org. Cierpliwość Boga) notes a remarkable relation between the sacrum and profanum (the example of the temple and the city).When it comes to the Creator himself, Szymik refers to him as Love, after Ratzinger.Religious experiences, in the view of the author of the thesis, permeate the poetry of Tadeusz Kijonka, Stanisław Krawczyk and Jerzy Szymik regardless of their own beliefs or the similarities and differences one can find between them. This is due to the fact thatthey are associated with something greater ‑ the personal struggle undertook by the poets which we can find reflected in their works.The doctoral thesis was created under the supervision of Professor Marian Kisiel.