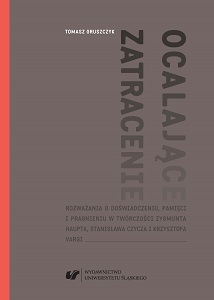 Author(s): Tomasz Gruszczyk
Subject(s): Literary Texts, Studies of Literature, Sociology of Art
Published by: Wydawnictwo Uniwersytetu Śląskiego
Keywords: Zygmunt Haupt; Stanisław Czycz; Krzysztof Varga
Summary/Abstract: The thesis consists of three parts. Each of them is divided into separate chapters devoted to particular authors. The composition of those chapters is determined by the level of representativeness of a particular issue in a particular prose text. Therefore, in the first part, dedicated to the strategy and fragment poetics, the author takes into consideration their updating firstly in the works of Krzysztof Varga, then of Zygmunt Haupt, and finally, of Stanisław Czycz.Reaching back to the past and the rise of importance of individual experience of loss constitute the axis around which the considerations are developed in the second part. It opens up with issues concerning brooding as a particular way of being in Haupt’s prose. Also, the fragments of Czycz’s short stories which are the trace of cherishing of a particular loss in the narrative are marked and discussed. In Varga’s prose, the author attempts to save the myth of the past, instead of the past itself.In the third part, the questions about the status and the way of being of the authorial subject are raised, as well as about conceptions of subjectivity in the works of Haupt, Czycz and Varga.The considerations proposed in the thesis, concerning the prose of the three different authors refer to thinking about literature in terms of both performance and representation. Each careful reading of a literary work understood in these terms should subsume not only what is represented, but also the act itself as well as the fact of representing. Then the text is understood, or imagined, as a scene from which a voice is heard. This is a phenomenon of the very communication, of the contact itself, whose symptom is all that is happening in the text and via the text itself on every formal and content level. In texts of those authors, the voice belongs to someone who can come into existence as the voice only. The identity of such a person, or rather his image, consists of life experience of the personal author, shreds of his biography, his consciousness, but also his unconsciousness, social and cultural norms, linguistic mechanisms and, finally, the literary tradition. The question about the “who” of this voice is in fact a question both about a particular, historical unit, but also about psychosocial, linguistic and literary norms and practices. Just such questions are posed from the scene of writing in this prose, while the specific answers are inscribed into the “I” field of this voice.Both the “who” of this voice and his “what” are to large extent powered by the experiences of the authors themselves. Characters who appear on the scene of writing have traits that are similar, or even identical with the traits that could be attributed to the people hidden under the names of the authors. Often enough, those characters point out to, or even declare, this similarity themselves. They narrate stories about themselves, about their past evoked by the power of their memory. By talking about it, they also talk about more or less conscious manners of shaping depictions of the past, about culturally determined mechanisms of not so much reproducing, but of producing it. They appear in texts as actors and narrators of the story. They will not refrain from speaking about that second activity. It gives them the semblance of authenticity, the semblance of being, but still this is just the semblance.The possibility of presence is undermined by the voice, which unceasingly performs the act of disillusion, being the act of disillusion itself. The way of its existence is paradoxical. It is not personal, or certainly, not only personal. It is a result of pure productivity of the act of writing, to be exact, of writing out, writing up and writing to show off. The voice says: I am here instead of; I mean something here because soand-so on the scene of writing is not able, or does not want to spring into existence as himself; By thus speaking and marking I am supplanting him here (that is the cynical voice of Czycz’s writing out). Some other time: I am not the voice of any individual, not even of a community, but a voice of collectiveness. I am not only the voice which presents, speaks about something, I am the voice of the dialogue itself (the dialogic voice of Haupt’s writing up). Finally: I am the voice of the scene itself, of writing, of representing” (the spectacular voice of Varga’s writing to show off).The voice attempts to head to its source, but the only thing it is left to do is to mark the source’s impossible presence. Literary marking and emulating in texts do not lead to any purpose (of retrieving what is lost, restoring the presence, establishing identity and expressing it in a complete work), as it is the purpose itself. That is why the author of the thesis states that in the prose of the authors mentioned above, the literary staging of the desire itself is effectuated. This desire renders any communication possible, which becomes here an act of summoning, corresponding with, and, as a result, saving only the remnants of what is not present or unavailable.The works of Haupt, Czycz and Varga are read as a project of the redeeming loss: occurring in the voice which comes from the scene of writing during the process of redeeming the remnants of a particular presence, by destroying and dispersing it in its literary articulation.