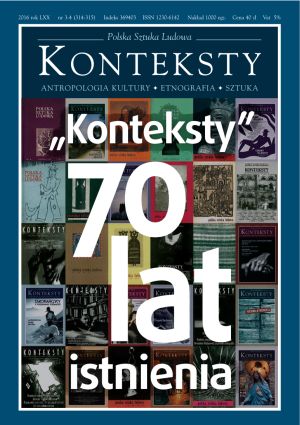 Summary/Abstract: The experiences of the narrator-protagonist of Zygmunt Haupt’s prose, similarly to the author’s life story, are delineated by a sequence of places, events, and people encountered in the course of his journeys. The author endowed his protagonist with the role of a voyager, an arrival, and an exile. The question concerning the status of those figures naturally also pertains to the model of subjectivity contained in the writings. The prime target of this essay is to indicate that the art of subjective existence in works by Zygmunt Haupt is tantamount to the art of discovering oneself in that what is different as well as amongst others; it denotes delineating common spaces or, better still, a territory of a community, some sort of We. To put it differently, in this prose to be a subject means to be subjected to a meaning that, first, becomes constituted within a space and with the assistance of that, which is shared (language, culture); secondly, it is always historical, inconstant, and labile. To be oneself will thus denote being not only an open being but also a dialogical one. The reflections of I will become possible only once the I of another is noticed and accepted; the same holds true for the I of the community. Here, the instrument applied for attaining such a goal consists of thought and speech, while the possibility of a conciliatory dialogue comes into being as the effect of the effort of emphatic comprehension emerging from moral responsibility (an obligation to respond thoughtfully to the voices of the others). This is already the heritage of a certain historically defined ethos – that of the 1910 intelligentsia.