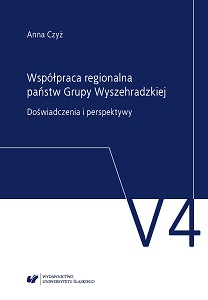 Author(s): Anna Sylwia Czyż
Subject(s): Politics, Political Sciences
Published by: Wydawnictwo Uniwersytetu Śląskiego
Summary/Abstract: The book is an attempt at summarizing the 25 years of existence of the Visegrad Group asa regional formation, founded in 1991 under the name of the Visegrad Triangle, and only later, due to the break-up of Czechoslovakia, renamed to the Visegrad Group, from then on including four cooperating countries – the Czech Republic, Poland, Slovakia and Hungary. The work consists of five chapters that sketch the three dimensions of cooperation within the group: political, sectorial and civic. In the first chapter the author familiarizes the reader with the concepts of the region, regionalism, regional cooperation, the idea of the Central Europe, and then consequently presents the Visegrad Group against the backdrop of other regional formations that sprouted in the Central-Eastern Europe in the beginning of the 90s of the 20th century, as part of the wider trend of the period called the New Regionalism. The second chapter, dedicated to the creation and functioning of the Visegrad Group, discusses the genesis of the Group, the aims of cooperation in both the preaccession and postaccession period, the stages and mechanisms of cooperation, the attitudes of particular countries to thevery idea of the visegrad cooperation and the motivations for creating this structure. The third chapter outlines the subject of the visegrad cooperation in reference to its four most important areas: political and economic coooperation within the group itself, cooperation within the European Union, cooperation in terms of the NATO membership, and cooperation with other partners, particularly with regards to the Visegrad plus formula. The fourth chapter tackles the activity of the only institutional structure the member countries of the Visegrad Group have formed, namely the International Visegrad Fund. The author analyses all of the forms of financial support such as grants, scholarships or artist-in-residence programs granted by the Fund as part of numerous programs within its offer. In the fifth chapter the author assesses the successes and failures of the Visegrad Group over the course of the twenty five years of its existence, points to the factors that have influenced, and will continue so, the development of the visegrad cooperation in both positive and negative ways, as well as attempts to sketchthe future prospects of the Group.