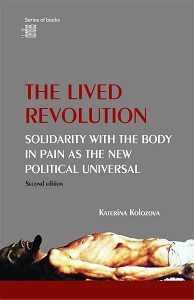 Author(s): Katerina Kolozova
Subject(s): Philosophy, Social Sciences, Gender Studies, History of Philosophy, Philosophical Traditions, Epistemology, Political Philosophy, Social Philosophy, Sociology, Contemporary Philosophy, Existentialism, Structuralism and Post-Structuralism, Marxism, Phenomenology, Hermeneutics
Published by: Институтот за општествени и хуманистички науки – Скопје
Keywords: the political; politics; singularity of Event; body; non-Marxism; non-philosophy
Summary/Abstract: The book explores the themes of a) “radical concepts” in politics (inspired by François Laruelle’s “non-Marxism” and “non-philosophy,” developed in accordance with Badiouan and Žižekian “realism”); b) politically relevant and applicable epistemologies of “Thought’s Correlating with the Real” (Laruelle), inspired by Laruelle, Badiou and Žižek and c) the possibility of hybridization of the epistemic stance of “radical concept” with the politics of grief and “identification with the suffering itself” proposed by Judith Butler. Radical concepts, the political vision and the theory based on them, are always already succumbing to the “Lived” (Laruelle), to the singularity of the Event (Badiou), to the encounter with the “kernel of the Real” (Žižek) conditioning a political horizon and the grand and small political narratives taking place within it. The thesis of the book is that the instances of the “lived,” the “event” or the “Real” can be inherently inter-connected by virtue of the category of the “experience” which is an instance of the sheer lived, the bare being subjected to an occurrence which is always already an instance of trauma. The mere subjection to certain” taking place,” the passion (in the etymological sense derived from the Latin verb pati or in the Spinozian sense) which is category beyond the psychological notions of feeling, rational (or irrational) thought, i.e., an ontological category referring to our relation with the “Out-There” which always already happens to us, is that to which the radical (political) concept succumbs to as the ultimate authority rather than to a doctrine, a system of thought, to the “philosophy’s auto-mirroring” (Laruelle). Political revolt or the revolutionary stance stems from precisely this bare experiential, the sheer lived and thus, from the Real of the conatus of staying-in-life. Paradoxically the survivalist stance, the principle of self-preservation is also the revolutionary stance which is by definition destabilizing and destructive. Bodily resistance to subjection (i.e., to discipline) and the continuity of the Self in-the-Real is the source of resistance. The Real of grief and mourning, the identification with the purely experiential stance of the suffering itself is the foundation of a “radical concept” of political solidarity, which by virtue of its being grounded in the Real, i.e., in the Lived, provides the possibility of acting in a revolutionary way. But it is also a form of human universality or political universality, which yet again is not historic universality but rather purely categorical. Other concepts that can be called radical, concepts which are minimally transcendental (Laruelle) and are, therefore, of revolutionary potential are also violence, mourning, labor (work) and gender (the trauma introduced by the linguistic determination as a “he” or a “she”), life, death, animal. Yet, the main focus of the book is the exploration of the lived of vulnerability, trauma and the conatus of life as the determination in the last instance of the revolutionary (political) stance. Clearly, the revolutions and the revolutionary stance this book advocates, or rather, whose potentiality it explores, are not necessarily historical revolutions produced by the intentionality to create politico-historic change. They are not this necessarily. Yet again they are such possibly. Still all purely (on the formal level) revolutionary stance tends to introduce universal change, radically change the political horizon and to reverse the politically unthinkable into a thinkable by elevating it to the level of a universal political truth.

Series: Series of Books in Theories of Identities