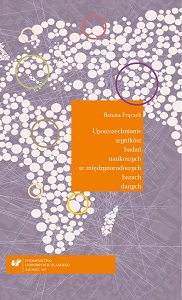 Author(s): Renata Frączek
Subject(s): Library and Information Science, Archiving, Electronic information storage and retrieval
Published by: Wydawnictwo Uniwersytetu Śląskiego
Keywords: research; International Databases; Bibliometric Analysis; Electrotechnics; Technical Sciences
Summary/Abstract: The issues of bibliometrics, scientometrics, informetrics and webometrics have an important place among research subject undertaken by Polish and foreign scholars. Initially,these notions were used only by researchers in the fields of library science, scientometricsand information science. However, at the turn of the 20th and 21st centuries, quantitativemethods became a fundamental tool for evaluation of, among others, sources of academiccommunication, academic research, research and academic centers. One of the elements ofthe evaluation is a quantitative analysis of academic publications in databases with international access. It is of particular importance in the case of technical sciences. This work is an attempt at a quantitative analysis of publications by Polish authors (affiliated to Polishtechnical universities) and Polish journals on electrotechnics in international databases. Thecontents are organized into four chapters with an introduction, conclusions, bibliography,name index and a list of figures and illustrations. Chapters one and two are devoted totheoretical issues, whereas chapters three and four – to practical issues.In the first chapter, selected issues concerning quantitative methods were presented, including an analysis of literature and a discussion over terminology carried out in book publications and journals. Moreover, selected examples of research conducted with the use of quantitative methods (including rankings and scientific reports) were discussed in this chapter). In chapter two, sources of information on academic publications, their origins and development (from bibliographic bases to citation indexes) were presented. A separate subchapter was devoted to databases of academic publications created by libraries of technical universities, and to indicators in the assessment of academic publications. Chapter three deals with electrotechnics as a field of science. An analysis was conducted with regard to the place of electrotechnics in science classifications based on selected examples, and the development of the teaching of electrotechnics at university level was shown. In this chapter, early and contemporary Polish journals on electrotechnics were presented, including journals published by technical universities themselves. Chapter four contains the results of an analysis of international databases (Scopus, WoS, CC), focusing on the representation of Polish journals, including their citations, and publications of authors with affiliation to Polish technical universities. Final conclusions of research and analyses have brought an answer to questions raised with regard to the assessment of representation in international databases of publications by Polish authors affiliated to Polish technical universities (in its various aspects, e.g., a publication type, language of publication, publication dynamics taking into account years of publications, cooperation with representatives of other European and non-European countries), and of Polish journals.