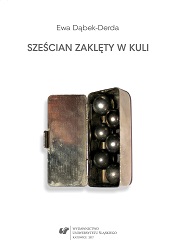 Sześcian zaklęty w kuli
A Cube Spelled in a Sphere

Author(s): Ewa Dąbek-Derda
Subject(s): Theatre, Dance, Performing Arts, Fine Arts / Performing Arts
Published by: Wydawnictwo Uniwersytetu Śląskiego
Keywords: Jerzy Juk Kowarski; space; theatre; scenography; cube; sphere; micro‑ and macrocosmos; maths
Summary/Abstract: A Cube Spelled in a Sphere provides an analysis of the artistic output of Jerzy Juk Kowarski – one of the most eminent Polish stage designers – focused predominantly on the issues of understanding and creating theatrical space. A point of departure in the discussion and a characteristic leitmotif of the disquisition presented in the book is the idea put forth by Étienne Souriau. By the end of 1940s, this French philosopher referred to a cube and a sphereas two basic models of performing arts and saw the essence of the theater in a contradistinction of the cubic and spherical principles of space organization. Juk Kowarski’s theatre experience, who applied mathematical intuition in his oeuvre, has verified philosophical speculation of Souriau. Theatrical space, which he has shaped since 1973, subject to numbers and shapes of geometrical figures, that is, squares, circles, straight lines, points, triangles, rectangles, and especially two perfect solids – a cube and a sphere – has displayed both spherical potential set in the closure of a scenic cube, and cubic – in theopenness of theatre spheres. Aside from the tension between the spherical and the cubic space, Kowarski’s theatrical scenery also distinguishes itself by a consistent inscriptionof mysterious signs in the theatre reality that point to interdependence of micro‑and macrocosmos. That which made the author of the present book attempt at illustrating Kowarski’s oeuvre by juxtaposing the selected old and contemporary, physical, cosmological, and philosophical concepts that deal with the understanding of space, was Kowarski’s treatment of the theatre medium as a room for a cognitive‑artistic experiment, a laboratory, where one can freely, for seen as an experiment, confront the world, as well as fascinationwith scientific theories. In his quest for suitable forms of scenery design, as well as other objects, for example, the installations, discussed here, placed in public space, the artistconsistently aims to shape them in such a way that they can contain an unlimited number of places, themes, styles, solutions, epiphanies, expressions, and aesthetics. At the same time, it will allow for weaving the staged dramatic narrative between basic ambivalence of the world illustrated by means of abstract notions – between chaos and order, simplicity and complication, locality and globalism, constraints and infinity, necessity and probability, andfinally between the ultimate opposition between physics and metaphysics. Juk Kowarski creates spaces that can indicate focus within cubic point of cosmic‑theatrical sphere, both the familiar and those forces of the world that we only sense. Such a powerful spatial form can be called a machine of play – a mobile that grasping the ideas of a performance in a form that culminates all energy and staging senses – in spatial structure reveals a model of a worlddeciphered by the theater.