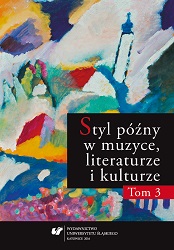 Contributor(s): Eugeniusz Knapik (Editor), Agnieszka Woźniakowska (Editor), Wojciech Stępień (Editor), Jarosław Szurman (Editor)
Subject(s): Social Sciences, Language and Literature Studies, Fine Arts / Performing Arts, Music, Studies of Literature, Sociology, Sociology of Culture
Published by: Wydawnictwo Uniwersytetu Śląskiego
Keywords: music; literature; culture; the late style; theory of music; philosophy
Summary/Abstract: Two further volumes of The late style in music, literature and culture, i.e. volumes three and four, consist of lectures which were delivered at a conference which was organised in 2014 by the Academy of Music in Katowice and by the University of Silesia. This was a third meeting of the series “the late style”, which was attended by musicologists, theoreticians of music, specialists in the field of history of art, cultural studies and philosophers. The set of problems discussed in both of the publications is proof that the phenomena of “lateness” and “decadence” continues to be a source of controversy and that they elude attempts at unambiguous classification and description.The third volume consists of articles associated with the problems of the late style in European culture starting from the 18th century. The problems which were discussed, ones that are examined by the authors from the perspective of the late style and “decadence”, include the following: Polish Enlightenment artes poeticae of Golański, Dmochowski and Krasicki, the empire style in the context of the entire period and Hegel’s thinking, Brahms’ Klavierstücke op. 118 as a cycle, the music of the Burgundian school and the works of the French composers of the end of the 19th century, Gabriel Fauré’s Piano Trio in D-minor op. 120 against the background of his chamber music works, Nowowiejski’s 4th Symphony op. 58 and a solo organ musical poem, In Paradisum op. 61, the individualism of Rachmaninov’s style, Mahler’s works, “decadence” in the novels of Wilde, Joyce and O’Brien, Lawrence’s poetic works in the perspective of the aesthetics of existence and Said’s book On Late Style, the rhetoric of dynamic “staticness” as a new philosophical and cultural paradigm.

O kończeniu i rozpoczynaniu, czyli co się rodzi, gdy przemija postać świata
(On Ending and Beginning, or What Is Born When the Present Form of the World Passes Away)