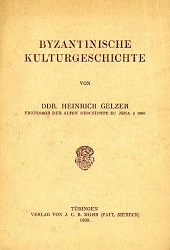 Author(s): Heinrich Gelzer
Subject(s): Cultural history, Middle Ages
Published by: CEEOL Collections / Digital Reproductions
Keywords: Byzanz;
Summary/Abstract: The Byzantine Empire was judged extremely harshly in earlier times, and Byzantinism is considered by us to be the technical expression for a servile tail-wagging. According to the view of the time, Byzantium was the epitome of all wickedness and depravity. However, thanks to the penetrating research work of the past generation, as it was carried out by the leading men among the Byzantinists - I mention among the French: Cardinal Pitra, Rambaud de l'Institut, Legrand, G. Schlumberger de l'Institut, Duchesne de l 'Institut, Diehl, RP Louis Petit 0. SA, Omont, among the Germans: Cardinal Hergenroether, Gass, Ehrhard, Krumbacher, Treu, de Boor, among the English: Finlay, Bury, among the Austrians: Miklosich, Müller, Jirecek, among the Russians: Veselovsky, Vasilievsky, Golubinsky, Durnowo, among the Greeks: Hatzidakis, Lambros, etc. - at least among the more highly educated, the thick fog of limited and dull prejudices gradually began to dissipate. So in the past generation a completely new picture of the medieval Greek state on the Bosporus, which has been cleared of the stale prejudices and which is vastly different from the previous one, has emerged. (introduction)