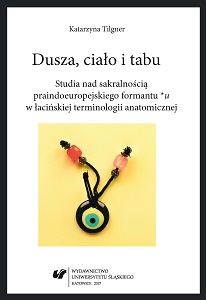 Dusza, ciało i tabu. Studia nad sakralnością praindoeuropejskiego formantu *u w łacińskiej terminologii anatomicznej
Soul, Body and the Taboo. On the Sacred Nature of the Pre-Indo-European Formative *u in Latin Terminology Regarding Anatomy

Author(s): Katarzyna Tilgner
Subject(s): History, Social Sciences, Language studies, Language and Literature Studies, Cultural history, Sociology, Social history, Theology and Religion, Philology, Sociology of Religion, History of Religion
Published by: Wydawnictwo Uniwersytetu Śląskiego
Keywords: taboo; body and soul; Pre-Indo-European language; Latin; morphology
Summary/Abstract: The author of the monograph Soul, Body and the Taboo investigates the hypotheses of two German scholars of the first half of the 20th century: Franz Specht and Wilhelm Havers, according to whom, one of the Pre-Indo-European formatives—the formative *u—was at its roots deeply connected with the sacred and the supernatural. For that reason, the formative was included in the words denoting objects of sacred, dangerous, supernatural or taboo nature. In her search of the echoes of the formative *u, the author focuses predominantly on the analysis of those body parts which, according to the English philologists James G. Frazer and Richard B. Onians, were supposed to be regarded by thePre-Indo-Europeans as the vessels of the soul, the main object of the taboo. Apart from that, the author analyses the names of organs which played vital parts in the practices of the haruspices, as well as those body parts which could arouse fear due to either the virulent forces residing within them or magical and apotropaic character. The etymological study focuses first and foremost on Latin nomenclature. However, the author refers also to Pre-Indo-European nomenclature and the current state of other Indo-European languages. Theetymological analysis is further strengthened through the cultural study of the beliefs and superstitions of ancient Romans, which they might have inherited from their ancestors.