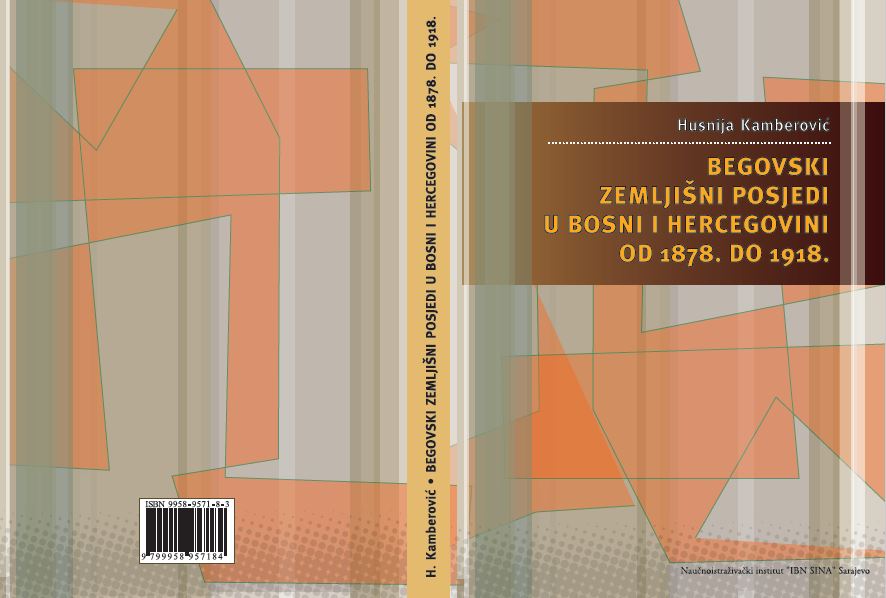 BEGOVSKI ZEMLJIŠNI POSJEDI U BOSNI I HERCEGOVINI OD 1878. DO 1918. GODINE
Beys Landed Property in Bosnia and Herzegovina from 1878 to 1918

Author(s): Husnija Kamberović
Subject(s): History, Economic history, 19th Century, Pre-WW I & WW I (1900 -1919)
Published by: Naučnoistraživački institut »Ibn Sina«
Keywords: bey families in Bosnia and Herzegovina; 1878 – 1918; Land owned by Beys ;
Summary/Abstract: It is not at all easy to define what should be considered as beys in the era, when in the Bosnia and Herzegovina at the turn of 19th to 20th century, the whole society was confronted with major changes caused by the establishment of a new state and political structure within which all the social structures that had existed until then had to undergo a radical transformation process. When, in the beginning of 20th century, a team of expert was engaged tasked with defining the title of bey in relation to Austro-Hungarian aristocracy, as well as to determine the manner of proving the right to hold that title and finally to decide which families are to be considered as the bey families, soon it was discovered that even the experts could not reach any agreement. That is why the Austro-Hungarian administration tacitly recognized the right of those families who used that title to continue using it, but this very fact did not acknowledge them any other political or social rights. Some political privileges that belonged to the richest families reflected, e.g., in their legal right to be elected deputies in the Bosnian Assembly, were not the consequence of their bey’s title but rather of their wealth. It is of no relevance that these were all more or less the bey families. Therefore it is absolutely justified to conclude that in the time of Austro-Hungarian administration, big landowners were beys, although within this landowners’ elite there were families that did not belong to the rank of beys. In these circles there was a clear distinction between the landowners who were beys and those who were not. Besides, there were bey families that in the Austro-Hungarian time did not belong to the landowners’ elite. These bey families have not been the subject of analysis in this book that focuses on the land owned by beys. The analysis of social status of these bey families will be the subject of some future book. Focusing on the land owned by big landowning bey families, this book particularly analyzes the structure of the estates owned by 46 bey families. One can see in this analysis that most of the land in BiH belonged to these families. About 15% of all the free land estates (beyluks)and above 30% of serfs’ settlements belonged to these families. Total number of serf settlements in 1918 that were owned by these 46 families, and fro whom one can establish with certainty names and surnames of the leaders of serf families, and the locality of the settlement, amounted to 31,986, but it is only for 5761 of those settlement that we can establish size and detailed structure, while for the remaining 26,225 we only know the name and surname of the serf and the locality of the settlement. This is still enough information for the analysis conducted in this book. Within this circle there are distinctly those bey families who have maintained, even towards the end of Austro-Hungarian administration, and despite a constant process of division of the families and their property, the status of landowning elite so that some of them owned over 50 serf settlements which was considered sufficient for one’s existence without the need to engage in additional jobs (handicraft, trade, etc.)It is evident that these are, mainly, those families who played significant role in the history of Bosnia since the beginning of 18th century, and one could track down their ownership over many of their estates for several centuries back. Following the history of these families during the 19th century one can conclude that marriage relations were very important for the expansion of their estates, since the inheritance of the estates involved both male and female family members, resulted in intermingling of ownership relations among the members of these families. Cases of purchasing land were rare.