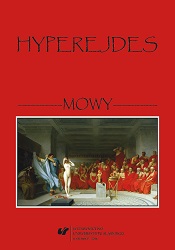 Contributor(s): Jan Kucharski (Translator)
Subject(s): Literary Texts, Cultural history, Studies of Literature, Ancient World
Published by: Wydawnictwo Uniwersytetu Śląskiego
Keywords: Hyperejdes; Mowy; Athens; oratory; antiquity; creation; translation
Summary/Abstract: The Athenian orator Hyperides of Kollytos (389–322 BC) was considered by ancient critics as second to none other than Demosthenes himself, and in many respects even praised as his superior. His work, however, suffered a very different fortune: his speeches all lost, for a long time he was known only from a handful of fragments quoted by ancient and Byzantine authors. The 19‑th century, however, brought about a series of astounding papyrological discoveries, which, among other things, gave us six of his speeches, preserved in considerable portions, and in one case, in its entirety. These are: 1. Against Demosthenes; 2. Indefence of Lycophron; 3. In defence of Euxenippus; 4. Against Philippides; 5. Against Athenogenes; 6. Funeral oration. The first decade of the 21‑st century saw another major discovery, which brought to light substantial fragments of two other speeches, Against Diondas and Against Timandrus. The present volume provides the first Polish translation of all these texts, followed by a selection of culturally and historically significant fragments.While doing full justice to the high opinion the ancient critics had of Hyperides, this relativelymodest (he is said to have composed seventy two speeches in total) anthology also providesthe modern reader with a unique glimpse into Athenian politics, institutions and mores in theperiod which followed the defeat at Chaeronea (338 BC). This book aims therefore not onlyat offering an accessible translation of Hyperides’ work, but also seeks to flesh out variousquestions and problems raised by these texts (too frequently preserved in a far‑from‑perfectcondition). Its main concern lies in political, social and cultural history, prosopography, andmost importantly – since with only one exception we are dealing here with forensic speeches – Athenian law and its vagaries. The entire corpus of Hyperides’ translated work is prefaced with general introduction which deals with political events in Athens and Greece after Chaeronea, with the biographical tradition of Hyperides, and finally with selected issues in Athenian legal history. Each of the translated speeches and fragments is in addition accompanied with a generous commentary and a detailed introduction, which aims to provide specific background to the case from which the text takes its origin.