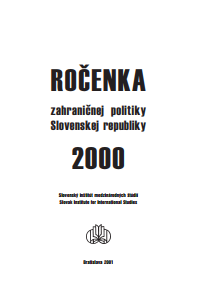 Contributor(s): Alena Kotvanová (Editor)
Subject(s): Politics / Political Sciences, Politics, Social Sciences, Law, Constitution, Jurisprudence, Constitutional Law, Criminal Law, Civil Law, International Law, Human Rights and Humanitarian Law, Public Administration, Sociology, Labor relations, Economic policy, Government/Political systems, International relations/trade, Security and defense, Evaluation research, EU-Accession / EU-DEvelopment, EU-Legislation, Politics and Identity
Published by: Research Center of the Slovak Foreign Policy Association (RC SFPA)
Keywords: Slovakia; 2000; EU; NATO; OECD; integrations; progress;Helsinki Summit; evaluation; human rights; identity; culture; economy; EU legislation; law; armed forces; security; defense; Poland; embassy; consulate;
Summary/Abstract: Basic idea of periodic publishing the Yearbook of Slovak Foreign Policy is rooting in the need to consolidate tradition of regular balancing the whole complex of Slovak foreign policy on all levels. Last volume as well as this one has approved the initiative of organising an evaluation conference and based on it to publish a Yearbook of Slovak Foreign Policy. This has been proved not only by interest from the side of expanding professional community and media, but above all from the key actors of foreign policy of the SR, state administration representatives, non-governmental institutions and academic and scientific circles. Specific role of the Yearbook is a presentation and statement of tasks of foreign policy of the SR from its primary actors view, analysis of key trends of specific period as well as providing current data of practical character. Our ambition is to make the Yearbook of Slovak Foreign Policy into a practical tool for everybody who is dealing with this area and to help to diversify and expand information sources focusing on this field. As for the content, this year the Yearbook is modifying and extending the structure proved last year. Except of presentations from the Conference Slovak Foreign Policy in 2000 - Progress in Integration and topical annexes it is opening the possibility to publish analyses of selected problems of foreign policy of the SR in the year 2000. The last year's conference was significant for the intentions defining 1999 as a break-through in Slovakia's integration effort. This year the conference characterised the level of using opened chances and evaluated Slovakia's progress and as many presenters stressed, progress in the newly started direction. Confirming political stability in the home country and position of a trustworthy partner towards foreign partners presents the basis of Slovakia's proceeding in integration ambitions to Trans-Atlantic and European structures. Harmony of home and foreign policy has been extremely important in this tendency, the harmony between declared objectives and the government's policy. This stipulated the already mentioned consolidation of newly gained Slovakia's trustworthiness in the eyes of the public abroad. Some of the presenters stressed, that integration is a challenge for the whole society. Public discussions focused on key topics of foreign policy play an important role in this process. In the elapsed time in Slovakia it was gradation in intensity of debate on national security. An important role is played by the Programme of the Government of the Slovak Republic focused on increase of information of the society on the reasons and consequences of integration of Slovakia into NATO in the framework of the PRENAME programme. Also in this nexus the Conference and the Yearbook provide the necessary space for presentation intentions of the SR and a public discussion on the intentions. It would not be possible to organise the Conference without a financial support of the Konrad Adenauer Foundation and the assistance of the Slovak branch office director Frank Spengler, as well as enthusiasm and effort of everybody involved. I'd like to express my thanks first of all to PhDr. Alena Kotvanová from the Slovak Institute of International Studies, who prepared the Conference as a project author and who compiled the Yearbook and to JUDr. Štefan Šebesta from the Institute of State and Law in the Slovak Academy of Sciences for his valuable advisory and judgment of the analytical part of the publication. Invaluable work during editing the Yearbook was done by PhDr. Tatiana Lauková and Mrs. Katarína Žáková. The Conference would not be possible without assistance of associated professor L'udmila Lipková, Dean of the Faculty of International Affairs of University of Economics in Bratislava and the students studying in this faculty.

Vystúpenie predsedu Výboru Národnej rady Slovenskej republiky pre ľudské práva a národnosti László A. Nagya
(Presentation of the Chairman of the Committee for Human Rights and Nationalities of the National Council of the Slovak Republic László A. Nagy)

Slovensko a Európska únia
(Slovakia and the European Union)