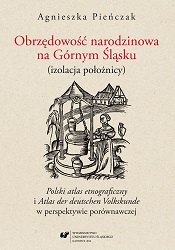 Author(s): Agnieszka Pieńczak
Subject(s): History, Anthropology, Social Sciences, Cultural history, Ethnohistory
Published by: Wydawnictwo Uniwersytetu Śląskiego
Keywords: Upper Silesia; Birth rituals; Polish ethnographic atlas; Atlas der deutschen Volkskunde; seclusion of the woman in labour; Ethnographic method; Silesian cultural heritage
Summary/Abstract: Because this volume is not a monograph of selected Upper Silesian rural communities, it does not present the whole spectrum of cultural phenomena known in this area. Rather, it brings a comparative analysis demonstrating what can be deduced about the factors influencing cultural diversity on the basis of two national atlases: Polski atlas etnograficzny (PAE) and Atlas der deutschen Volkskunde (ADV). Both show geographically close cultural phenomena, which makes a comparative analysis possible. Because of the vast area they cover (from the Rhine in the west to the Bug River in the east and from the Alps and the Northern Carpathians in the south to the Baltic Sea and the North Sea in the north), they demonstrate the ranges of the analysed cultural phenomena in a broad context, thus allowing for various conclusions based on the ethnogeographic method. Still, as the comparative potential of both atlases is limited, it is here presented on the basis of selected examples drawn from birth rituals. They all concern enforced seclusion of the woman in labour observed in rural communities, an issue that has so far remained understudied in ethnological research. The volume is concerned not only with Upper Silesia but also with other areas. The analysis embraces the territory of Poland in its present borders and, additionally, regions explored for the purpose of ADV (at present Germany, the Czech Republic and Austria). Special attention is given to Silesia, with cultural artifacts and phenomena it shared with the neighbouring areas and those most characteristic of this particular region.Chapter 1 outlines the ethnogeographic method, especially in the context of its two importantinterpretive perspectives: geographic and abstract—spatial. It also demonstrates theusefulness of some ethnographic and dialectological atlases as sources for the study of theorigins and evolution of traditional culture. Referring to the experience of scholars whoapplied the ethnogeographic method in their interpretations, Chapter 2 highlights the specificcharacter of Silesia as an ethnic and cultural borderland. Chapter 3 presents most importantliterature on birth rituals and seclusion of the woman in labour in rural communities(beginning with the second half on the 19th century till the beginning of the 21st century). The next chapter discusses specific problems involved in the study of birth rituals conducted for the purpose of PAE and ADV. The final chapter focuses on the interpretation possibilitiesthat emerge when PAE and ADV are compared in terms of selected aspects of birth rituals.The analysis is limited to proscriptions enforcing isolation of the woman in labour which appear in source materials of both atlases. The following proscriptions are discussed: crossingthe threshold of the room or house, leaving the homestead, going to the cellar or to the attic,drawing water from the well, visiting neighbours and taking part in rural festivities. Theseissues are presented on fifteen innovative synthetic maps, fourteen of which demonstratethree different chronological cross-sections: one covering the beginning of the 1930s (theADV research), the next one ranging from 1969 to 1976 (the PAE research into birth rituals),and the last one concerning the years 2008–2011 (the PAE research conducted in several villages in Upper Silesia). The book contains a large number of detailed registers, includingtwo extensive annexes, a bibliography and a list of maps, figures, tables and charts. One ofthe annexes comprises a catalogued, numbered list of towns and villages referred to in PAE,where birth rituals were studied (1969–1976); the other presents the description of informantsfrom incoming groups which then inhabited Silesian villages. The type of analysis proposed in this volume concerns only selected aspects of birth rituals. Still, it clearly demonstrates that comparative studies based on Polski atlas etnograficzny and Atlas der deutschen Volkskunde are possible provided that two important conditions are met: thematic unity and typological similarity of the sources. Each of the atlases requires a special approach—a thorough study of its content in terms of the quantity and the themes, with a particular focus on the similarity of material classifications. The ranges of the majority of phenomena drawn from ADV, demonstrating the condition of rural culture in the first half on the 1930s and presented on contemporary maps, are usually vast and fall not only on the core of the former Reich but also on its peripheries, including a considerable portion of the western and northern territory of today’s Poland. These phenomena can therefore be considered as older, demonstrating a unique cultural communion of the area of Central Europe. They are typical not only of Silesia, as they have also been recorded in neighbouring regions. Differences appear with regard to the participation of women in labour in rural festivities—this specific prohibition seems to have been characteristic primarily of Upper Silesia; moreover, it tends to appear in reports of the inhabitants of this region even in present times, which is a signal of a certain cultural continuity. The ethnographic maps published in PAE and ADV allow for the conclusion that Silesia has always been a permanent borderland, an intermediate area, where the analysed phenomena could permeate from Western Europe directly or through Czechia and Moravia.It would be difficult to identify clear borders here or even peripheries. Numerous settlementprocesses tended to introduce not new forms but variations of older rituals, customs andbeliefs.