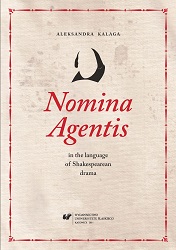 Author(s): Aleksandra Kalaga
Subject(s): Literary Texts, Cultural history, Studies of Literature, Ancient World
Published by: Wydawnictwo Uniwersytetu Śląskiego
Keywords: wine; antique; Noe; Dionizos; Orfeusz; Aleksander Wielki; Horacy; Nemezjan; alcoholism; Mediterranean culture
Summary/Abstract: William Shakespeare is considered to be one of the most fruitful neologists in the history of the English language. Although Shakespearean scholars are at variance in their estimates of the exact number of his neologisms,1 they are in agreement that he was “a most prolific coiner of words” (Willcock, 1934, p. 12). It seems surprising, therefore, that there are so few systematic, analytic studies of Shakespearean word-formation. Such established books as Evans (1952), Jorgensen (1962), Hulme (1962), Joseph (1947) portray the vocabularyof Shakespeare merely as a tool for achieving stylistic artistry, and they are not truly linguistic in their approach.2 The most celebrated linguistic accounts of Shakespeare’s language either disregard the word-formational component altogether (Abbott, 1883; Blake, 2002), or present only a brief, general discussion of the most productive processes (Brook, 1976; Blake, 1989). The most detailed word-formational accounts are studies by Garner (1982), Dalton-Puffer(1994), and Salmon (1987). These, however, are article-length and thus do not exploit the subject in full. The present monograph is an attempt at delivering a comprehensive studyof one aspect of Shakespearean word-formation, namely the category of Nomina Agentis. The greatest weight is attached to the morphological and semantic aspects of agentive derivation. The formal analysis, which covers the combinatorial properties of the agent-forming suffixes with respect to the etymological and syntactic features of their bases, is supplemented with the study of semantic effects of a given type of nominalisation. Although the approach is primarily synchronic, diachronic information is also provided where it seems beneficial in supplying a wider context, for instance, for the further attestations of a given Shakespearean neologism, or for a contrastive juxtaposition of a Shakespearean agentive formation with the Modern English one. Conceptually, the monograph falls into two parts: the theoretical-descriptive, whose main aim is to formulate a working definition of an agent, as well as todevelop an appropriate model within the frameworks of which the study could be conducted, while the second part is the proper morphosemantic analysis of the sampled data. Structurally, the work is divided into six chapters. Chapter 1 focuses on the problem of nominalisations in selected linguistic theories, such as, among others, TGG, GS, and Cognitive Linguistics. Attention is drawn both to those aspects of a given grammar which could profitably be employed in the study of nominalisations, as well as to the problems and difficulties stemming from the holistic application of a given model. The selection of the frameworks discussed in the chapter has been made with a view to develop the methodology that could be successfully applied to the analysis of the data sampled in the corpus of Shakespeare’s plays.Chapter 2 discusses the notion of productivity in word-formation. Different modes of the conceptualisation, operationalisation, and evaluation of productivity are surveyed, and a special emphasis is put on the problem of estimating the productivity of a given process in historical language studies. The following two chapters (3 and 4) relate Nomina Agentis to the theory of categorisation. It is shown how the prototype semantics, developed originallyby Eleanor Rosch and subsequently borrowed by cognitive linguists, can be employedto deal with fuzzy boundaries between some linguistic categories, like, for example, Nomina Agentis and Nomina Instrumenti. The theory also proves effective in incorporating denominal performers of actions into the category of agents (the problem is discussed in Chapter 4). Chapter 4 also discusses finer distinctions within subject nominalisations, for example, the notion of an experiencer. A brief survey of Modern English methods of deriving agent nounscan also be found here. Chapter 5 presents a linguistic and extralinguistic background of EarlyModern English. It provides an insight into external and internal factors that shaped the language of the Shakespearean epoch. The chapter focuses on issues directly connected with word-building and word meaning, hence the discussion of internal features of the language has been restricted to word-formation and semantic changes.Chapter 6 is the empirical part of the study, where Shakespearean agent-forming techniques are presented and analysed. Each suffix is studied from both the formal and the semantic perspective. An attempt at evaluating the productivity of a given process is also made.Since, as has been shown in Chapter 1, none of the currently available theories is inclusive enough to deal with the complex aspects of nominalisations, I have adopted a rather eclectic approach, the core of which constitutes the Generative Semantics framework enriched with the prototype theory attitude towards category membership, while the formal analysis is performed in conformity with the basic tenets of TGG.The corpus has been compiled from The first folio of Shakespeare: The Norton facsimile (2nd ed.), and the Arden Edition of Shakespeare’s Plays (second, and, where available, third editions). The etymological information, as well as the glosses, are cited after the OED. Line numbering and quotations are from the Arden Shakespeare. The glosses are illustrated with exemplary references. I have not provided references to all the occurrences of a given sense in the corpus, as presenting a complete typological compilation is not the aim of this study. (Introduction)