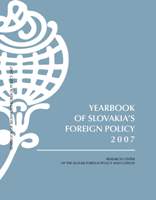 Slovak Priorities in the European Union

The Western Balkans: the Need for a New Vision and Strategy

Visegrad Four in 2007: Revitalization after the Post-Enlargement Fatigue

Relations with the Eastern Neighbors in 2007

Modernization of the Slovak Foreign Service

The Economic Dimension of Diplomacy

List of Treaties Concluded between Slovakia and Other Countries in 2007

List of the Embassies of the EU, NATO Countries and Some Other Countries

List of the Embassies of the Slovak Republic, Permanent Missions, Consulates General and Slovak Institutes Abroad