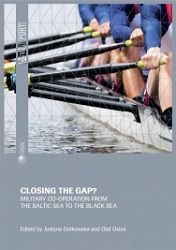 Author(s): Tomasz Dąborowski, Mateusz Gniazdowski, Justyna Gotkowska, Jakub Groszkowski, Andrzej Sadecki, Andrzej Wilk
Subject(s): Politics / Political Sciences, Politics, Security and defense, Military policy, Geopolitics
Published by: Ośrodek Studiów Wschodnich im. Marka Karpia
Keywords: security and defence co-operation; the Baltic Sea region;the Black Sea region;Visegrad Group (V4);NATO;the EU;
Summary/Abstract: The contracting defence budgets in Europe, the difficulties in developing the EU’s security policy, NATO's transformation, the reorientation of US security policy and the problems experienced by European defence industries – all together have in recent years created an increased interest in political, military and military-technological co-operation in Europe.It has manifested itself in concepts of closer co-operation within NATO and the EU (smart defence and pooling&sharing), bilateral and multilateral initiatives outside the structures of NATO and the EU (such as the Nordic Defence Co-operation or the Franco-British co-operation) and debates about the prerequisites, principles and objectives of bilateral, multilateral and regional security and defence co-operation. The present report aims to analyse the potential for security and defence co-operation among selected countries in the area between the Baltic Sea and the Black Sea, i.e. the Nordic states (Denmark, Finland, Norway and Sweden), the Baltic states (Lithuania Latvia and Estonia), Poland's partners in the Visegrad Group (the Czech Republic, Hungary and Slovakia) as well as Romania and Bulgaria. The authors were guided by the assumption that those states are Poland's natural partners for closer regional military co-operation. It may complement ‘the Western’ direction of Poland's security and defence policy, i.e. relations with the partners from the Weimar Triangle and the US. Its goal is not to replace the existing security structures but rather to strengthen military capabilities in the region within NATO and the EU.