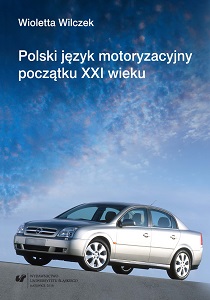 Author(s): Wioletta Wilczek
Subject(s): Anthropology, Social Sciences, Language studies, Language and Literature Studies, Gender Studies, ICT Information and Communications Technologies
Published by: Wydawnictwo Uniwersytetu Śląskiego
Keywords: hobbyists portals; gender linguistics; automotive portal; virtual communication; gender stereotypes
Summary/Abstract: The work contains a linguistic analysis of automotive portals which are examples of hobbyists websites. The linguistic material was drawn from general automotive portals and portals intended for women. The examples are not uniform as far as their form is concerned – they originate from various links of web portals, therefore they are represented by various genres of expression and their quality varies. The source of description constitutes aboveall articles, statements of users expressed in fora, tests of cars and opinions thereof, pieces of advice, interviews, editorials and commentaries. The two main research perspectives involve gender linguistics and sociolinguistics. The selection of the research perspective was determined by the peculiar nature of the material – the content and the purpose of portals distinctly determined the methods of description. The main problems associated with the theoretical and methodological contexts are presented in the first part of the work. The context of internet communication enabled the author to introduce the concept of cybergender i.e. the gender which functions on the Internet. The second chapter contains a description of the material. This chapter presents general information about automotive portals (against the background of internet websites of hobbyists) and the webpages which are analysed in the work. The description also involves the genre field of the automotive portal.The subsequent two parts of the monograph, divided according to the research perspectives, constitute an analytical part. The dominant area of analysis as far as genre linguistics is concerned has to do with the linguistic values which are ascribed to women and men and the possibilities of transcending these values i.e. most frequently the occurrence of a given property in a representative of the opposite sex. The two most common shifts in this respect has to do with the emotionality and expressiveness of the language of men and the expertise and professionalism of the language of women. One of the important aspects of research turned out to be the category of the stereotype associated with the beliefs about a given gender. In this respect one of the more important points has to do with the pejorative image of the woman driver which consists of a number of elements which inform about the poor abilities of the fair sex in the area of driving a vehicle. The components of this stereotype include e.g. difficulties in parking a vehicle, confusion of the left/right directions, insufficient driving speed, careless manoeuvres, enhancement of one’s makeup and holding a telephone conversation while driving a vehicle. The prevalence of opinions which negatively qualify women drivers is testimony of the permanence of gender stereotypes associated with motorisation.The group of users of automotive portals was treated as a social group and the vocabularywhich is peculiar to this group appears to be an element of a sociolect. In the part whichis devoted to the sociolinguistic level the most important lexical and semantic fields in thecontext of the automotive sociolect were distinguished. Among the groups which were analysed we may mention e.g.: terms which refer to cars and motorcycles, brands and models of vehicles, vocabulary associated with using a vehicle, the elements of a car or a motorcycle,the professions associated with motorisation. Taking into consideration the grammaticalcontext determined the most productive means of expressing: diminutives and terms ofendearment, neologisms, neosemanticisms or borrowings. The thematic areas which arepresented determine the areas of interest and communication of the portal users, and theyalso indicate the sources of automotive vocabulary. The expressivity of many forms is testimony of the role of motorisation in the lives of users and of the emotional relationshipbetween a vehicle and its owner, which is expressed also by animisation and anthropomorphisation of cars and motorcycles. The research which was conducted revealed a complex area of vocabulary associated with motorisation and the variety of linguistic means which occur in the said sociolect.The analysis of selected automotive portals emphasised the basic problems which arecrucial from the perspective of car- and motorcycle-related themes, and the aspects whichare frequently mentioned on the aforementioned websites. The division into general portalsand women-oriented portals was the reason for the sharper distinction of the category ofgender and gender-related stereotypes. The female profiling of the sender and the receiveris testimony to the existence of automotive themes in the lives of women and of the fact thatwomen engage these themes from a female perspective which emphasises elements whichare crucial for them (e.g. maternity or beauty). Women-oriented portals are also a field ofstruggle with stereotypes and the means of popularising automotive knowledge among therepresentatives of the female sex.However, many examples prove that there is only one gender in the world of cars andmotorcycles – the gender of a good driver. The complexity and the variety of themes determined the choice of crucial problems, motivated by an attempt at creating a wide spectrum of problems associated with web hobbysts portals associated with motorisation.