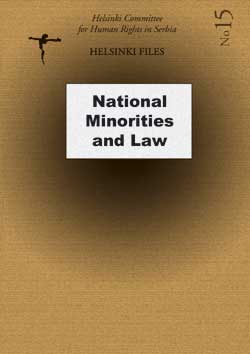 Contributor(s): Latinka Perović (Editor), Sonja Biserko (Editor), Seška Stanojlović (Editor), Ivana Damjanović (Translator)
Subject(s): Politics, Education, Civil Law, International Law, Human Rights and Humanitarian Law, Governance, State/Government and Education, Inter-Ethnic Relations, Ethnic Minorities Studies
Published by: Helsinški odbor za ljudska prava u Srbiji
Keywords: Serbia; minorities; legal regulations; international law; federal act; rights and freedoms; native language; education; Vojvodina; central Serbia; political parties; judiciary;
Summary/Abstract: October 2000 political changeover did not produce the fundamental break with Milosevic's policy. There are numerous examples thereof, notably as regards Republika Srpska, Kosovo and Montenegro. Insistence on that orientation in the face of factual defeat had a negative impact on status of inter-ethnic relations in Serbia proper. National policy aiming at creating an ethnically pure Serb state ended with a catastrophic balance: hundreds of thousands of dead, several million displaced persons and refugees. In the past decade minorities, notably Croats (during the war in Croatia), Bosniaks (during the war in B&H) and Albanians (during the whole decade) bore the brunt of "ethnic-cleansing" policy. By extension, relations between the majority people and some minorities were exacerbated. In the meantime minorities have radicalised their stands and are waiting for resolution of their problems by dint of international community brokerage. Most conspicuous example of the aforementioned was South Serbia, in which the danger of conflict spill-over was great for a while. But thanks to NATO and other international organisations actions and efforts tension has eased and cooperation and revival of economy have been initiated owing to enormous political and financial support of the West. Serbia has entered the period of facing up to difficult and long-term consequences of nationalistic and war policy of the former regime. The entire society has been devastated, and institutions of system destroyed. Long wars, international isolation and bombardment campaign have impacted the general social mood, which is marked by high intolerance, xenophobia, anti-Semitism and emergence of neo-Nazi groups. This is all due to the political vacuum and absence of vision of Serbia's future. Such a general atmosphere affects national minorities, who feel increasingly threatened. The last census, according to unofficial information, indicates that Serbia remains a markedly multi-ethnic country. This may be explained by massive emigration or brain-drain of young and educated Serbs. About 400,000 refugees from Croatia, Bosnia and Kosovo, contrary to some expectations, have not to a larger extent changed the demographic structure of the country. Despite emigration of minorities, their percentage remained the same, in view of de-assimilation of Vlahs and Romany (they stopped identifying with Serbs). This means that the minority issue would remain the hot issue, notably if the nationalistic block continues to persist on realisation of ethnically pure state. Some ethnic communities have been territorially homogenised, hence some of them, in some areas constitute the majority population. Some national minorities, notably Albanians, Bulgarians, Croats, Hungarians, Bosniaks/Muslims, and Romanians inhabit border areas. Thus their territorial homogenisation is a complex political fact. Despite current authorities efforts to fine-tune national minorities-related domestic legislation to the European standards, situation in that regard is slowly changing because of badly impaired inter-ethnic relations in the last decade. Ethnic distance had been increased, but as of late it started dwindling, but not everywhere and not with respect to all minorities.

MODE OF EXERCISE OF THE NATIONAL MINORITIES RIGHTS IN SERBIA